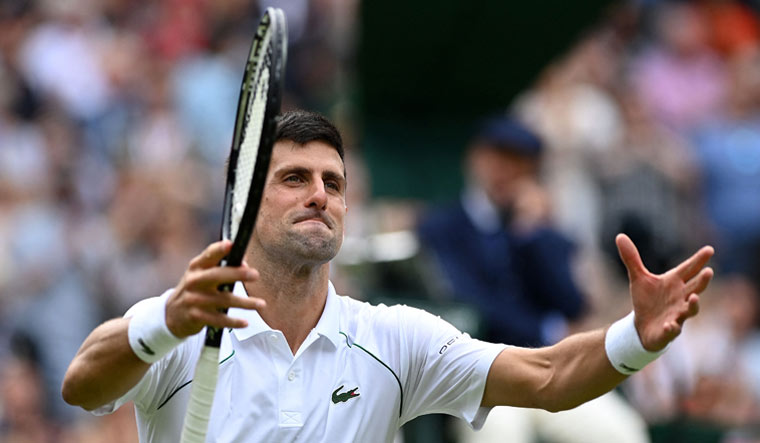 Novak Djokovic reached his 12th Wimbledon quarterfinal on Monday to pull even with Arthur Gore, who had a 117-year head start, while a parade of newcomers also made the final eight.

Gore first played Wimbledon in 1888. Djokovic made his debut in 2005, and they share third place on the men's all-time list for most men's quarterfinal berths, behind Roger Federer's 18 and Jimmy Connors's 14.

Khachanov, seeded No. 25, outlasted Korda 3-6, 6-4, 6-3, 5-7, 10-8. With both players battling fatigue and nerves, there were 13 services breaks in the final set, and for Korda, it was a disappointing end to an otherwise impressive Wimbledon debut.

The No. 7-seeded Berrettini became the first Italian man in 23 years to reach the Wimbledon quarterfinals by ousting Ilya Ivashka 6-4, 6-3, 6-1.

Barty was troubled again by a shaky serve but saved eight of 10 break points and did manage an ace on match point to end French Open champion Barbora Krejckov's 15-match win streak, 7-5, 6-3.

Barty has yet to play her best in the tournament but is the favorite to claim her second Grand Slam title. The Australian won the 2019 French Open and was the Wimbledon girls singles champion in 2011.

Sabalenka earned her first berth in a Grand Slam quarterfinal by beating Rybakina 6-3, 4-6, 6-3. Plkov, seeded eighth, has now reached the final eight at every major after hitting 10 aces and eliminating Liudmila Samsonova 6-2, 6-3.