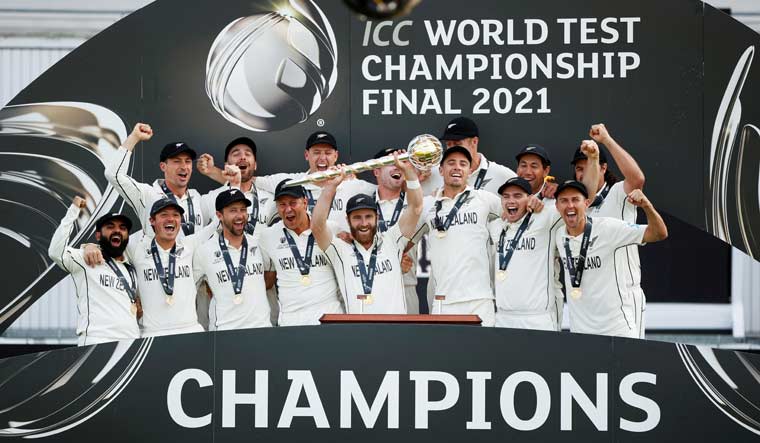 New Zealand skipper Kane Williamson and veteran batsman Ross Taylor gave the Indians a masterclass in batting as they helped the Kiwis romp home by eight wickets in the World Test Championship final in Southampton.

Needing 139 to win, New Zealand reached the target with 7.1 overs and eight wickets to spare, to win the ICC Test mace in style. Williamson (52*) and Taylor (47*) shared an unbeaten 96-run partnership to decimate the Indians, who had seen a glimmer of hope when spinner Ravichandran Ashwin removed openers Tom Latham (9) and Devon Conway (19) with only 44 runs on board.

But Williamson and Taylor played with caution and sound technique, putting away only the loose balls—a stark contrast to some Indian batsmen who got out to rash shots or while playing away from the body.

It was New Zealand's first ICC title win in over two decades, having won the ICC KnockOut Trophy in 2000-01.

By tea on the sixth and final day, India had another batting disaster with only 170 runs in their second innings leaving New Zealand with a target that they are expected to chase.

It was one of the worst batting performances on a good track with sun beating down and the Indian batsmen never found the going get easier.

Williamson is probably one of the few captains who have now got Indian team out for less than 250 in six consecutive innings, a testimony to his brilliant cricketing acumen and near perfect execution by his bowlers.

Tim Southee (4/48) did the early damage with his swing bowling, Neil Wagner (1/44) bowled those hard "rib cage" overs coming round the stumps and Trent Boult (3/44) with his ability to bring it back into the left-hander made it for a brilliant few hours of Test cricket.

And then, India's nemesis Kyle Jamieson (2/30), who again got his "bunny" Virat Kohli, third time in three Tests and twice in one to make it an icing on the cake.

Rishabh Pant fought for two and half hours for his 41 but it was more intent and less content as a cavalier devil may care approach didn't get him too many runs.

The catch that Henry Nicholls took while running backwards was as good as one would witness at this level. Pant's dismissal did hamper India's chances but before that an inspirational piece of captaincy from Williamson left an indelible mark.

He got Wagner to come round that wicket to Jadeja and the left-arm "pounder" went wide enough to nearly cut the side crease and angled one for Jadeja to nick it behind the stumps.

However Pant's approach of dealing with the New Zealand attack was better than being in the shell, something that did more harm than good for Cheteshwar Pujara (15 off 80 balls).

Before Pujara, the extra bounce outside the off-stump had the Indian skipper feeling for it and B.J. Watling got the easiest of catches in his final game for Black Caps.

Pujara, whose abilities of grinding out bowlers has reached mythical proportions and once again he was never looking to score. The pressure was always there and Jamieson fired one in with the angle. Pujara wanted to remove his bat but it seemed the ball tailed him and Ross Taylor got a regulation catch.

Ajinkya Rahane (15 off 40 balls) also didn't last long and as it has happened with India often, their tail didn't wag save Mohammed Shami (13), who sashed three fours before Williamson cleverly deployed a "fly third-man" (neither short third-man nor traditional third man) for a slash over slips which promptly landed in the fielder's palms.

Perhaps the cricket Gods wanted a course correction for Williamson and his men, who were left high and dry during that evening at the Lord's where twist of cruel fate and horrible rules robbed them off deserving glory in the 2019 World Cup.

That was not to be the case on Wednesday when their bowlers choked India, who seemed to be in pursuit of a draw to lay their hands on the glittering mace.

For Kohli, this is the third failure in big ICC events after the 2017 Champions Trophy and the 2019 World Cup.