Sushil Kumar: From humility to controversy 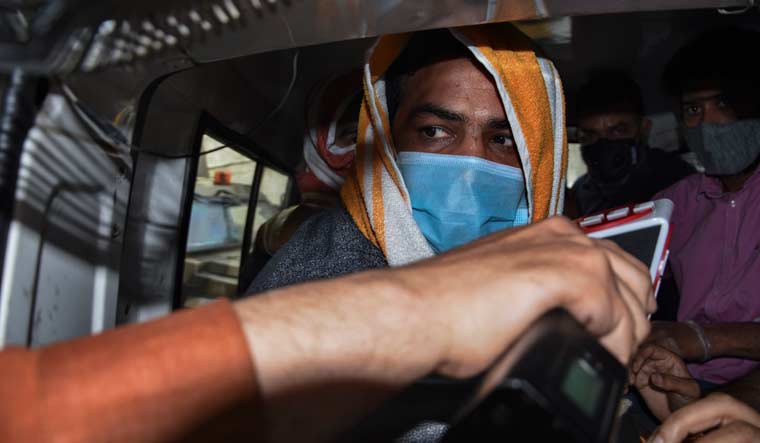 A television journalist tries to get a reaction from Indian wrestler and two-time Olympic medalist Sushil Kumar as he is taken away for medical procedures after being arrested by police in New Delhi, India, Sunday, May 23, 2021 | AP

The chase has finally ended. For three weeks, the Delhi Police have been hot on the heels of wrestler Sushil Kumar—on the run ever since his name came up in the murder of 23-year-old former junior national wrestling champion Sagar Dhankhar. The youngster was allegedly beaten to death following a brawl between two groups of wrestlers at the Chhatrasal Stadium in North Delhi.

Sushil has since been sent to six-day police custody, along with co-accused Ajay. Ironically, his arrest took place on International Wrestling Day.

The picture of one of India's greatest athletes, surrounded by gun-toting crime branch cops, being brought to court with his face wrapped in a towel—like any ordinary criminal suspect—is heart-breaking.

The image seen today bears a striking contrast to the life of Sushil Kumar, the boss of the Chhatrasal stadium and the one who, while on deputation, turned around both the look and the facilities of the stadium. This was the very stadium where he started honing his skills as a 14-year-old wrestler, living in pitiable conditions at the hostel inside.

He came to Delhi on deputation from his parent department—Northern Railways as OSD Sports, Delhi Government, taking over the influential position from his guru and father-in-law, the great Satpal.

Hailing from a humble background he mastered his wrestling nuances at the akhada in Chhatrasal to become India's finest, most decorated wrestler of all time. Here he would also impart what he had learnt to fellow wrestlers in the morning—be it boys as young as 7-8 or senior Indian wrestlers. All would sit and hear "Guru-ji" share the nuances of the sport in the mud pit outside the wrestling hall at the stadium. He made surprise visits to various sporting facilities of the Delhi Government; once visiting the cricket academy of Sanjay Bhardwaj, Gautam Gambhir's former coach, to raise objections. The sight of Bhardwaj, a Dronacharya awardee, waiting to explain to Sushil in the latter's office with  a firm Sushil holding his own—showed how far he had come

The Beijing 2008 Olympics is always going to hold a special place in Indian sporting history. It witnessed Sushil Kumar, rising from relative obscurity (outside of the wrestling world), soaked in sweat and blood marks, playing an unheard of repechage round and winning the bronze medal at the Games at the fag end of the Games—standing on the podium with his hands folded becoming an icon for an entire generation to follow. This was Sushil Kumar, humility personified, son of a bus conductor, hailing from the outskirts of Delhi. After winning his second Olympic medal at London 2012 Olympic Games, Sushil's aura only grew further, brighter.

But ahead of the Rio Olympics in 2016, controversies started coming in one after the other.

He had issues with the  Wrestling Federation of India ahead of the Rio Olympics. While the WFI backed Narsingh Yadav, who had won the quota place, Sushil wanted a selection trial. Ultimately, Yadav was unable to compete in Rio having failed a dope test. Yadav filed an FIR against a young wrestler from Chhatrasal stadium accusing him of contaminating his food. And while he did not name Sushil in the FIR, it was well known that the Maharashtra wrestler was blaming Sushil for the fiasco. A CBI enquiry happened but nothing came out of it.

Then there was a case of wrestler Praveen Rana, who was Sushil's opponent in the selection trials before the Common Wealth Games in 2018, being assaulted by a group of people—allegedly Sushil's supporters. Rana and his brother required hospital treatment and an FIR was filed against Sushil and his supporters.

Sushil's bid to qualify and compete at Tokyo Olympic Games did not fructify—he suffered a shock defeat in the 74kg weight category in the qualifying round in Jakarta. Post this, the Sports Authority of India which had supported his Asian Games training via TOPS dropped him from the scheme, keeping in mind plans for Tokyo Olympics 2020.

For a few years now, there have been murmurs and raised eyebrows on the company Sushil Kumar had been keeping—namely the so-called pistol-touting alleged aides of his. But no one ever doubted or questioned his achievements and place in wrestling's annals.

Though no investigation or judgement has been delivered in the case yet, the latest controversy that Sushil Kumar finds himself in has diminished his legacy and stature as an ideal role model. Meanwhile, the Delhi government has turned down his request for another year's extension to his deputation to Delhi and he stands repatriated to his original department—northern railways.