The sabre fencer is training in Italy with its national team 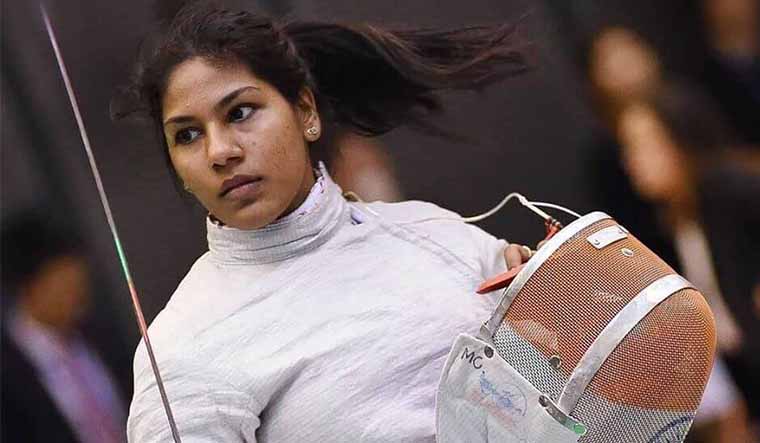 Chadalavada Anandha Sundhararaman Bhavani Devi is a gentle, soft-spoken, down-to-earth person. But when she wears the 12kg heavy, stainless steel tri-coloured painted mask and holds the 500gm sabre in her hand, she transforms into an elegant, determined swordswoman. She has already created history by becoming the first Indian fencer to qualify for the Olympics, and is aiming to go the full distance.

Devi won a quota through the Adjusted Official Ranking (AOR) method after the Budapest World Cup in March.

Devi is currently based in Rome, taking part in a three-week training camp along with the Italian national team. Given the COVID-19 surge back in India, it is unlikely Devi will be returning home before Olympics, and will continue to train in different camps in Italy - the power house of fencing - in June and July, along with her personal coach Nicola Zanotti. She will be getting vaccinated in Italy.

The 27-year-old from Chennai started her career by training with bamboo sticks. Bhavani took baby steps in fencing in 2004 while studying at the Muruga Dhanushkodi Girls' Higher Secondary School.

Speaking to the media in a web interaction organised by the Sports Authority of India, which supports her, Devi said, "Olympics will be very special for me. I am really looking forward to it. It will be the first time when most Indians will watch me competing," she said. "There will be only 34 fencers in the women's category unlike the World Cup or Grand Prix, where there are 100-200 competitors. Most of the competitors have already been to the Olympics. I just want to give my best."

Currently ranked 42 in the world, Devi is looking to make the most of the training she is getting in Italy before going into her first Olympics in Tokyo in July this year. With no international competitions scheduled before the Games, it is all about fine-tuning and improving tactically. "Now we are used to it. Last year, too, there were no competitions. In 2021, there have been one or two competitions till now. We train here with competitive fencers. These are short but intense camps. It’s not so much on the technical aspects that we focus on, but tactical - where we need to work, for each of our opponents."

Devi thanked the SAI, the Indian embassy and Fencing Association of India (FAI) for the opportunity to train in Italy.

She hails from a middle-class family; her late father was a priest and mother a homemaker. Devi is grateful for the support she got from her parents, especially her mother, at every step. "Only because of my parents, I was able to push myself harder to overcome all difficulties," she said. "My mother always encouraged me. She would tell me ‘If today is not good, tomorrow will be better. If you give 100 per cent, you will definitely get the result.’ Even from her hospital bed when she was recovering from COVID-19, she told me focus on my dream and play in the Budapest World Cup rather than return home to be with her.”

She got her first formal training in fencing at the SAI Centre, Thalassery, Kerala. Funding was not easy to come by, but her parents persevered. Her journey is as much her dream coming true as it is her parents'. “It’s difficult to stay away from your family in this tough situation, but it’s not just my dream, it’s my family's dream. More than me, they have worked hard to realise this."

The Ministry of Youth Affairs and Sports has supported the FAI through the Annual Calendar of Training and Competition (ACTC) with a budget of Rs 16.94 crore in 2019-20. Before she was inducted into TOPS, Devi received a special grant of Rs 20 lakh under the ACTC. Now, for her coaching fee till the Olympics and purchase of specialised equipment, Rs 19.28 lakh has been sanctioned by the Mission Olympic Cell.