NorthEast are now heavy favourites to grab a play-off spot 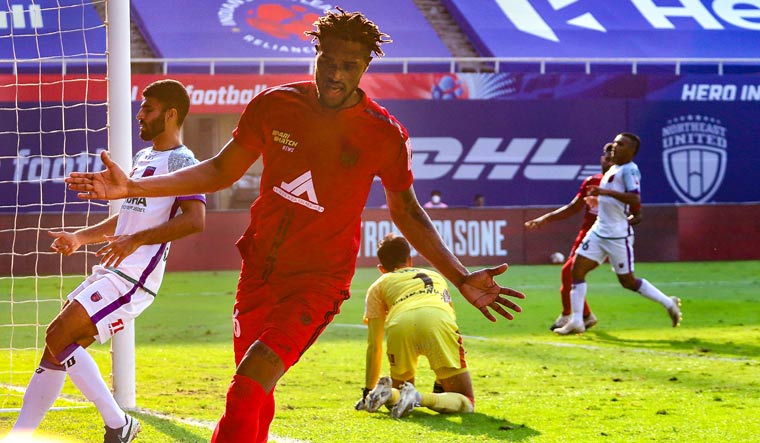 NorthEast United continued their unbeaten run and defeated Odisha FC 3-1 to climb to the third spot of the Indian Super League (ISL) standings in Vasco on Sunday.

Goals from Luis Machado (9th and 24th) and Deshorn Brown (19th) helped the Highlanders move to third spot and strengthen their chances of qualifying for the play-offs.

With the Hyderabad FC and FC Goa, who are currently at fourth and fifth respectively, taking on each other in their final game, NorthEast are now heavy favourites to grab a play-off spot.

NEUFC started the game at a furious pace and only needed nine minutes to come up with the first goal. Ashutosh Mehta found Machado with an accurate cross and the latter hit it first time past a diving Arshdeep Singh.

It was no less than what NorthEast United deserved given the attacking intent they showed in the first period of the match.

A second goal came ten minutes later through Brown. Federico Gallego entered the Odisha half with the ball and threaded through a pass for the new recruit, who had been enjoying a fruitful stint since his arrival from Bengaluru FC. The Jamaican slotted home with a sublime finish.

Another five minutes later, NEUFC had their third goal, with Gallego again at the centre of things. He spotted Machado making a run into the box and found him with an accurate looping ball. Machado made no mistake and headed the ball past the onrushing Arshdeep.

There seemed to be no way back for Odisha from there. But they did manage to get back into the game in stoppage time just before the first-half whistle.

New signing Inman, who has impressed since arriving from ATK Mohun Bagan, received the ball from Daniel Lalhlimpuia and attempted a finish from a narrow angle. His shot took a heavy deflection off NEUFC defender Mashoor Shereef and went in.

The goal injected new life into what had been a poor first half from Odisha and they signalled their intention to go looking for more goals by throwing on Diego Mauricio at halftime.

But it was their opponents, who kept creating chances. Machado had a chance early in the second half but his shot was wide. Then, in the 62nd minute, Arshdeep had to pull off a fantastic double save as he denied both Gallego and Machado.

There was some late drama as Gurjinder Kumar was sent off for a second yellow, putting NEUFC at a numerical disadvantage. Immediately after that, Brown missed a golden opportunity as his shot from a one-on-one position was straight at Arshdeep.

Odisha kept applying pressure till the end, but the NorthEast defence stood firm as they took their team to victory and three points.