The 32-year-old has not played for Arsenal since March 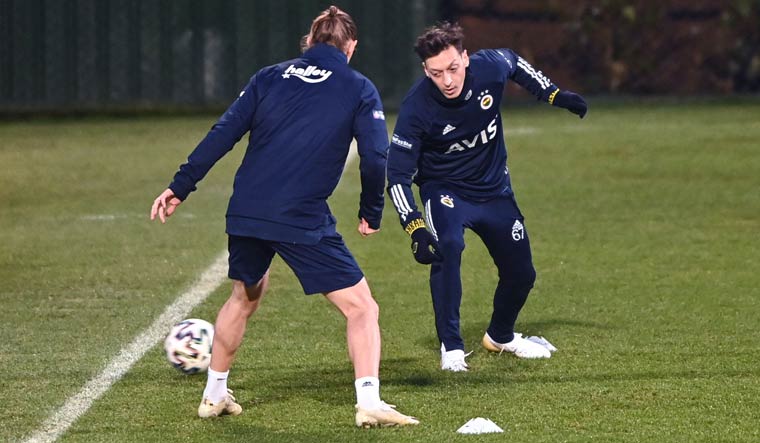 He had arrived in Istanbul early on January 18 to seal the transfer. Özil had, a day before, confirmed his move from Arsenal to the Turkish club, saying he was "very excited" to play for them. There were concerns about his fitness as he had missed nearly a year of football. The 32-year-old had not played for Arsenal since March and was left out of the club's Premier League and Europa League squads.

"I'd like to thank the club [Arsenal] for this amazing journey over the past seven-and-a-half years," Özil said. "The support I have felt from the team and fans during my time here has been truly incredible and something I will always be grateful for."

Arsenal technical director Edu thanked Özil for his contributions to the club, which included three FA Cup triumphs, and for his professionalism in negotiating the transfer while manager Mikel Arteta said it was a "privilege" to play with and coach him

Arsenal had signed the former German playmaker in 2013 for a then-club record fee of about 42 million pounds ($57 million) from Real Madrid. He was a key member of the Arsene Wenger-led squad, but fell out of favour with Wenger's replacement Unai Emery and also the current manager Mikel Arteta. The latter had said Özil's omission was for "football reasons".

Özil, who has Turkish ancestry, had courted controversy in the past for non-footballing reasons. His support for Turkey President Recep Tayyip Erdogan was widely criticised. He had even met the president ahead of the 2018 World Cup, and Erdogan was also the best man at Özil’s wedding in June.

The 32-year-old bore the brunt of Germany's group-stage exit in the tournament. Blaming the German Football Association of racism and witch-hunt, he retired from international football. He made 92 appearances for Germany and scored 23 goals.

In 2019, in an Instagram post, he spoke out strongly against China’s persecution of the Uighur population in the northwestern region of Xinjiang and criticised Muslims for not doing more to highlight the issue. Arsenal had distanced itself from his comments, saying it was the footballer's personal opinion.

Özil told Turkish broadcaster NTV that he was looking forward to playing for Fenerbahce, a club he said he has supported all his life."I am a Fenerbahce fan. That is why I am very happy to be coming to Turkey with Fenerbahce," Ozil said. "I'm very excited. God gave me the chance to wear this jersey as a Fenerbahce fan. God willing, I will carry it with honour and do everything I can for the team," he was quoted as saying. "Of course, I'm missing a few matches. I haven't played in a match in a while, but I am physically fit. I have no issues," he said.