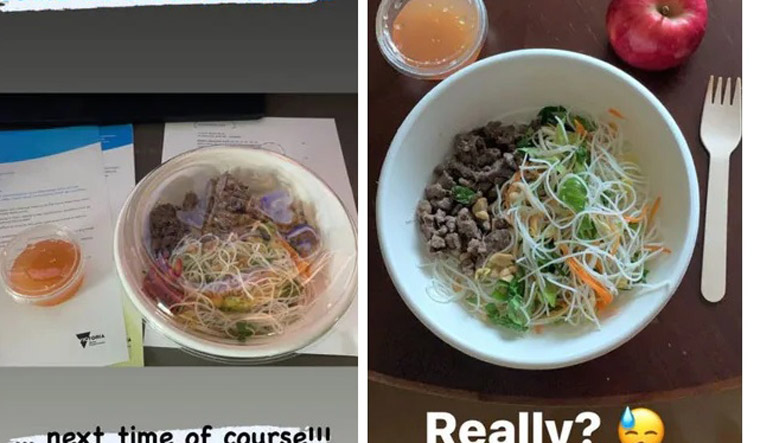 Australian Open players, forced to go into quarantine after four positive tests for COVID-19 emerged from two of the charter flights bringing players, staff, officials and media to Australia for the first tennis major of the season, took to social media to express their anger over the quality of facilities and meals offered to them at the hotels they have been quarantined.

World No. 15 Carreno Busta took to Instagram to share a photo of a meal, consisting of salad, apple and a cup of juice as a story with the caption "really."

World No.17 Fabio Fognini too took to social media to share a picture of the meal and hoped that "could be a better lunch...next time course."

There were also reports of players deciding to skip the hotel meals and choosing to order online. World No.28 Benoit Paire ordered a McDonald’s meal to his room while Benoit Paire of France and Bosnian Damir Dzumhur chose to dine out.

New Zealand's Artem Sitak told Reuters that he was eating the food provided by the hotel but other players were using a food delivery app instead."We told Tennis Australia that its not up to the professional tennis players standards, so they are working on improving that. They gave us the Uber Eats, if we want to order Uber Eats well get extra money in the end with our prize money to compensate for that," Sitak was quoted as saying.

Meanwhile, Kazakhstan's Yulia Putintseva took to Twitter to share a video of mouse she had spotted in her room. "Been trying to change the room for a 2 hours already ! And no one came to help due to quarantine situation," she wrote along with the video.

Been trying to change the room for a 2 hours already ! And no one came to help due to quarantine situation🤦🏼‍♀️ pic.twitter.com/LAowgWqw58

British player Heather Watson said on Twitter that she and others who arrived from Abu Dhabi "are NOT allowed out (of) our rooms.

Being unable to leave their room would mean the only workouts they would be able to have would be on exercise equipment left in the rooms of all of the players.