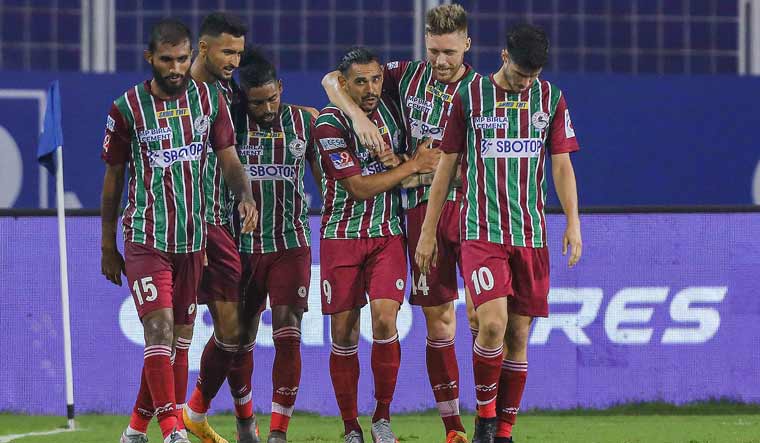 High on confidence after their wins over bigwigs FC Goa and Bengaluru FC, ATK Mohun Bagan will look to make a hat-trick of wins when they face Chennaiyin FC in the Indian Super League in Bambolim on Tuesday.

ATK had won against the same side in the ISL summit clash to clinch a record third title before merging with Indian heavyweights Mohun Bagan.

The Mariners will be heading into the match after a good break of 10 days as Lopez’s boys would enjoy fresh legs over their opponents from Chennai who looked profligate to settle for a 2-2 draw against struggling SC East Bengal in their last match.

A win for ATK Mohun Bagan will take the Kolkata heavyweights to the top of the table ahead of the New Year as the key for the Habas-coached side would be to guard complacency.

To their advantage, ATKMB’s talismanic striker David Williams, who was battling injury issues, opened his account with a peach of a goal against Bengaluru FC in their previous match.

Following the Aussie’s first goal, the Mariners fans hope that they will replicate the same magic this season.

The Marina Machans on the other hand have revamped their side with Csaba Laszlo taking over the reins from former manager John Gregory who served as the head coach of the club for two seasons and also strengthened their attack with Jakub Sylvestr.

Even as Sylvestr plays as a sole striker, he remains active in the midfield with their main playmaker Rafael Crivellaro.

Lallianzuala Chhangte and Rahim Ali scored the two goals against SC East Bengal in the last match but at the same time they missed chances in plenty to miss out on three points.

Against a compact ATKMB defence in Tiri, Sandesh Jhingan and Carl McHugh and the likes of Pritam Kotal, Subhasish Bose playing as defensive midfielders it will be interesting to see how Chennaiyin FC win the possession battle.

Laszlo believes it will be tough for the team to to play a match in three days.

“If you have the next game in three days, it will not be easy but it will be a different game, definitely,” he said ruing their missed chances against SCEB.

“It is incredible the number of chances we create. We have to be converting more of these opportunities.”

Laszlo will be boosted by the return of right-back Reagan Singh at the back.

The Hungarian tactician will be drilling down the importance of defending better from set-pieces against an organised ATKMB outfit, after having conceded two soft goals from corners against SCEB.