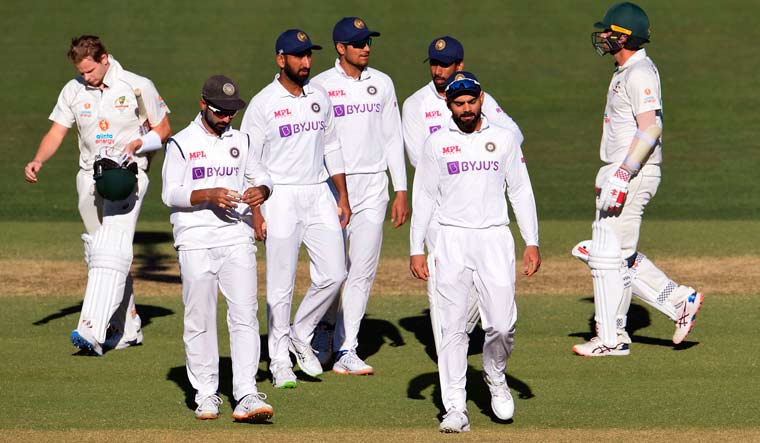 With shock and amazement, the cricket fraternity reacted to the nightmare that the Indian team endured in broad daylight before crumbling to its lowest-ever Test score of 36 in Adelaide on Saturday.

India's much-vaunted batting line-up was blown away by the menacing pace duo of Pat Cummins and Josh Hazlewood as Australia recorded a convincing eight-wicket win inside two and half days in the opening Day/Night Test.

"The OTP to forget is 49204084041," former India opener Virender Sehwag tweeted in reference to the batsmen's sequence of scores in the second innings.

None of the Indian batsmen managed to reach double digits.

"With the way India batted & bowled in the 1st innings, they were in the driver's seat, but the Aussies came back really hard this morning.

"That is the beauty of Test cricket. It's NEVER over till it's over. India was outclassed in the 2nd half. Congratulations to Australia!" Tendulkar wrote.

India's previous lowest Test score was 42 against England at the Lord's in 1974.

"Have to feel for the Indian batsman as never saw that coming - it was one of those days where the batsman nicked everything & didn't play and miss at all ! Unbelievable..."

David Warner, who missed the four-match series opener due to a groin injury, was delighted with the result that gave his team a 1-0 lead in the rubber.

After the abject surrender, former England skipper Michael Vaughan remarked, "Told ya ... India are going to get hammered in the Test Series."

Former India pacer R.P. Singh said, "It was a bad day today no doubt but remember it's a 4 match series. We have bounced back in past and this team can do that too..

Ex-India spinner Pragyan Ojha wrote, "The game was evenly poised and we were in it... but one session went badly against us."

There were no demons in the Adelaide Oval pitch but Hazlewood (5-3-8-5) and Cummins (10.2-4-21-4) displayed fast bowling of highest quality, the impact of which will be far-reaching with three more Tests to go.

Chasing an easy target of 90, Australia achieved it in only 21 overs.