Thapa, Isma scored for Chennaiyin, while Valskis pulled one back for Jamshedpur 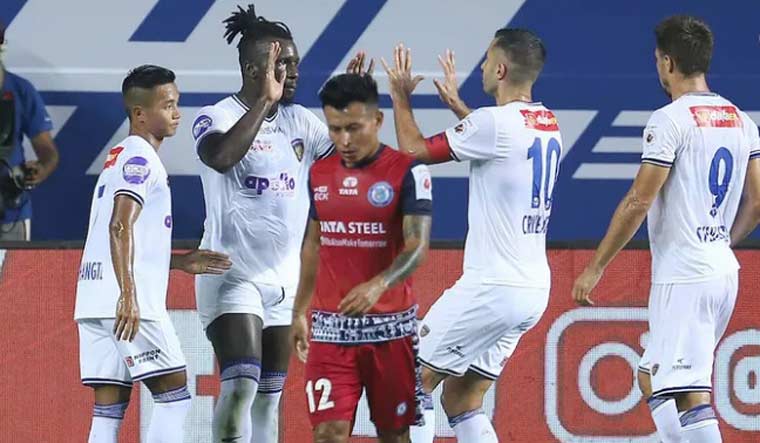 Chennaiyin FC players celebrate their goal against Jamshedpur FC in an ISL 2020-21 match, at Tilak Maidan Stadium | via isl.com

Chennaiyin FC dominated for the greater part of 90 minutes to beat Jamshedpur FC 2-1 in their first match of the Indian Super League 2020-21, at the Tilak Maidan Stadium in Goa.

While Anirudh Thapa and Esmael Goncalves scored for Chennaiyin, Nerijus Valskis pulled one back for Jamshedpur. All the goals came in the first half. There could have been more goals in the match, but for some poor finishing from both the teams.

Chennaiyin had only themselves to blame for not stretching their lead. The last year's finalists had a bright, with Thapa whipping in the ball low to Jamshedpur goalkeeper T.P. Rehenesh's left off a cross from the right by Esmael in the first minute of the match.

Jamshedpur had a good chance to equalise in the seventh minute but Peter Hartley's header off a free-kick went just wide.

At the other end, Goncalves and Lallianzuala Chhangte were denied by an alert Rehenesh, but Chennaiyin's continued pressure paid off when they won a penalty in the 26th minute. Jamshedpur's Issac Vanmalsawma Chhakchhuak pushed Chhangte, who was going for a header, from behind, and Esmael stepped in to convert the resultant penalty, sending Rehenesh the wrong way.

But as it seemed that Chennaiyin would bulldoze Jamshedpur, Owen Coyle's boys hit back with last season's golden boot winner Nerijus Valskis heading in a brilliant pass from Jackichand Singh.

The goal seemed to spur Jamshedpur, who carried the momentum into the second half. But they just could not find the net, with the best chances coming in the 64th minute when Stephen Eze headed the ball wide, and 68th minute, when Jackichand Singh latched on to a fumble from goalkeeper Vishal Kaith only to see the ball cleared in front of the open goal by Enes Sipovic.

Both the teams had their chances as the match came to a close, but neither scored. In the end, Chennaiyin were rewarded for a brilliant start while Jamshedpur were left to rue their missed chances.