IPL 2020 Eliminator: SRH edge out RCB in last over in low-scoring thriller 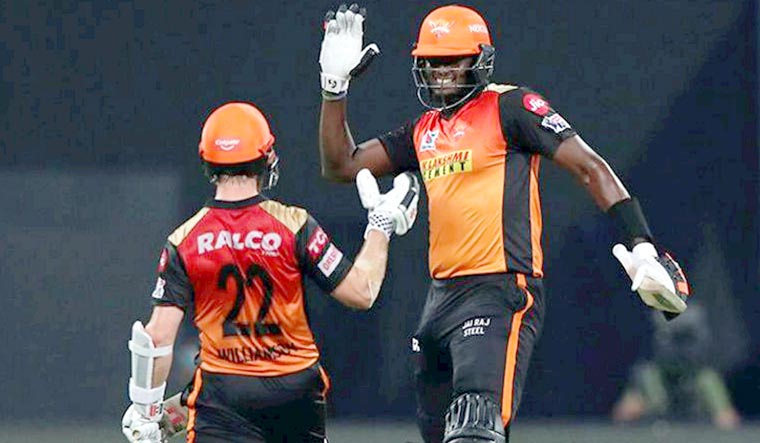 Jason Holder and Kane Williamson of Sunrisers Hyderabad celebrate their win over Royal Challengers Bangalore in the Eliminator match of IPL 2020, in Abu Dhabi | PTI

Sunrisers Hyderabad held their nerve to clinch a six-wicket win over Royal Challengers Bangalore in the IPL 2020 Eliminator at the Sheikh Zayed Stadium in Abu Dhabi. Chasing a below-par target of 132, Kane Williamson (50*) and Jason Holder (24*) guided SRH home in 19.4 overs. Hyderabad made heavy weather of a seemingly easy run chase, having been reduced to 67/4 by the 12th over. But Williamson and Holder ensured there were no further hiccups with a match-winning partnership of 65 runs for the fifth wicket.

After failing miserably with the bat, RCB clawed back into the game with the ball, with leg-spinners Adam Zampa (1/12 in 4 overs) and Yuzvendra Chahal (0/24 in 4) bowling a tight line to dry up the runs. Pacer Mohammed Siraj, too, played his part, dismissing the SRH openers Shreevats Goswami (0) and skipper David Warner (17), to raise hopes of an unlikely win for RCB.

But Williamson and Holder had other ideas.

In fact, Holder was the hero with the ball, too, for SRH, taking 3/25, which included the prized scalp of RCB skipper Virat Kohli (1).

Choosing to bowl first, SRH pacers Holder and T. Natarajan (2/33) broke RCB's back with clever mix of pace and pinpoint yorkers, while Shahbaz Nadeem chipped in with one wicket.

For RCB, AB de Villiers, once again, waged a lone battle, scoring 56 runs, with five fours. Aaron Finch, who replaced Josh Philippe in the playing XI, was the other notable scorer, with 32 runs. The two shared a 41-run stand for the third wicket.

SRH will now meet Delhi Capitals in the Qualifier 2 on November 8 and the winner will play the final against a rampaging Mumbai Indians on November 10.