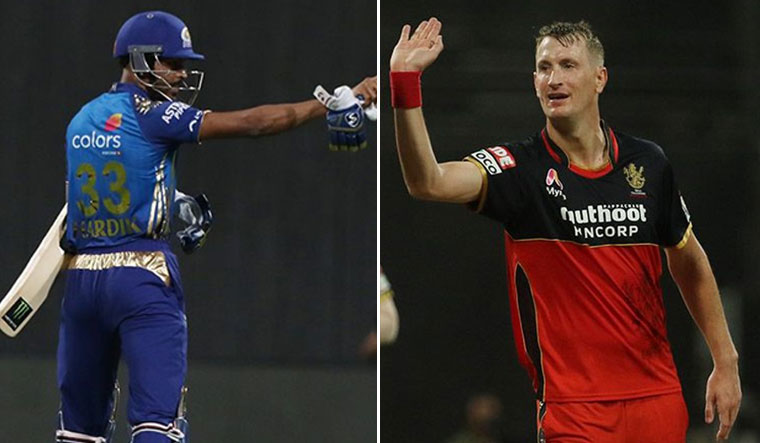 Mumbai Indians’ Hardik Pandya and Royal Challengers Bangalore’s Chris Morris were reprimanded for breaching the IPL Code of Conduct during the Indian Premier League match between the two teams on Wednesday in Abu Dhabi.

The two cricketers were involved in a verbal argument during the 19th over as MI were chasing the target of 165 runs set by RCB.

“Chris Morris, the Royal Challengers Bangalore all-rounder, has been reprimanded for breaching the Dream11 Indian Premier League’s (IPL) Code of Conduct during his team’s match against Mumbai Indians at Abu Dhabi,” read a statement released by the BCCI.

“Hardik Pandya, the Mumbai Indians all-rounder, has been reprimanded for breaching the IPL’s Code of Conduct during his team’s match against Royal Challengers Bangalore at Abu Dhabi,” the statement said.

“For Level 1 breaches of the Code of Conduct, the Match Referee’s decision is final and binding,” the statement concluded.

Pandya and Morris exchanged a few words when the former hit the South African player’s for a six and MI were just 7 runs short of a win. However, in the next ball, Morris got the better of the Indian all-rounder when Mohammed Siraj caught him at cover. As Pandya walked back to the team dugout, both players made gestures at each other during what looked like a heated argument.

The 50-run stand between Pandya and Suryakumar Yadav helped Mumbai Indians smoothly chase the target. Yadav, who hit an unbeaten 79 off 43 balls, finished the match for MI with a four as they won the match by 5 wickets.

The win has secured Mumbai Indians’ place in the play-offs as they topped the points table with 16 points.