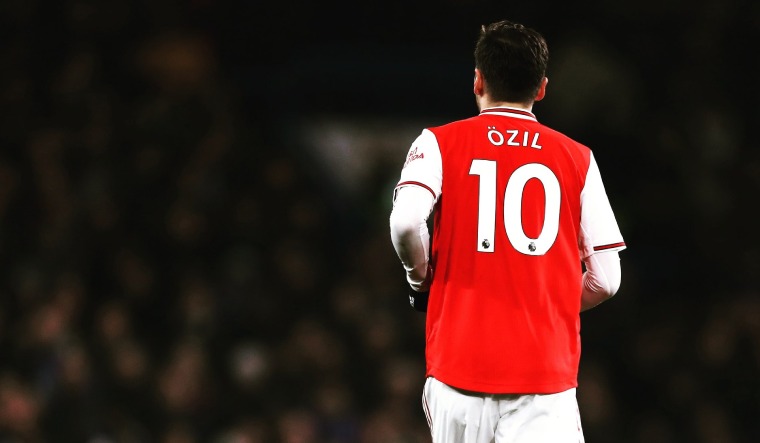 Arsenal footballer Mesut Ozil on Wednesday admitted that he was “deeply disappointed” by the club’s decision to exclude him from the Premier League squad as well as the Europa League. He is the highest-paid in the history of the club, earning GBP 350,000 (USD 450,000) a week.

Speculations over Ozil’s future with Arsenal has run rife since some time as the former Germany international has not played a single match for the club since March this year. The sport and football leagues were suspended for a time due to the coronavirus pandemic, but even after its resumption, Ozil was not seen in action.

In a heartfelt message posted on his social media, Ozil expressed his disappointment and went on to question the club’s loyalty, adding that though his devotion to the club has not been reciprocated, he would continue to fight for his chance.

“This is a difficult message to write to the Arsenal fans that I’ve played for over the past few years. I’m really deeply disappointed by the fact that I have not been registered for the Premier League season for the time being. Upon signing my new contract in 2018, I pledged my loyalty and allegiance to the club that I love, Arsenal, and it saddens me that this has not been reciprocated. As I have just found out, loyalty is hard to come by nowadays. I’ve always tried to remain positive from week to week that there’s maybe a chance to get back in the squad soon again. That’s why I kept silent so far.

“Before the Coronavirus break I was really happy with the development under our new coach Mikel Arteta – we’ve been on a positive way and I would say my performances were on a really good level.  But then things changed, again, and I was not (sic) longer allowed to play football for Arsenal.

“What else can I say? London still feels like home, I still have many good friends in this team, and I still feel a strong connection with the fans of this club. No matter what, I will keep fighting for my chance and not let my 8th season at Arsenal end like this. I can promise you that this hard decision won’t change anything in my mindset – I will continue to train as best as I can and whenever possible use my voice against inhumanity and for justice,” he concluded the note.

Ozil’s contract, which he renewed in 2018, will expire next year. He had joined Arsenal in 2013 for a then club-record GBP 42.4 million fee from Real Madrid.

Meanwhile, Arteta has taken “full responsibility” for the decision to axe Ozil from the Premier League and Europa League squads, stressing that it is solely due to football reasons. The Spaniard said he has failed in getting the best out of the footballer.

“Honestly I take full responsibility. I have to be the one getting the best out of the players. It is my responsibility. It is nothing related to any behaviour or, like I read, the pay cuts,” Arteta said. Ozil was one of three players who refused to take a pay cut as part of cost-cutting measures taken by many football clubs during the pandemic.

“I have to make the decision to get the best possible squad out there to win football matches and competitions as often as we can,” he further said.

He added that he was saddened by the decision to axe Ozil, along with defender Sokratis Papastathopoulos.