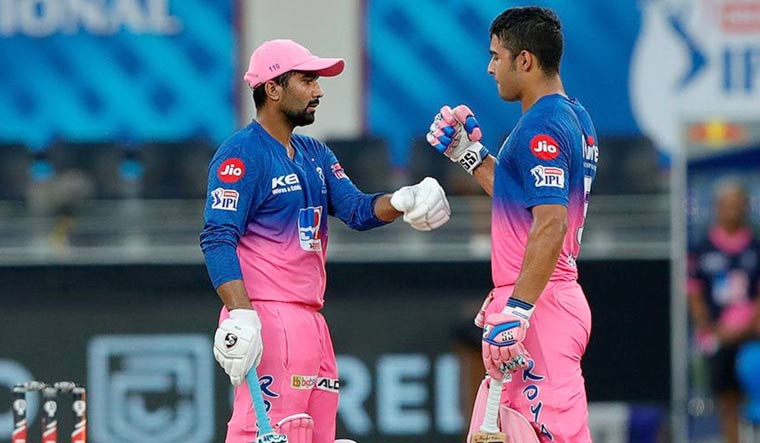 Rahul Tewatia (left) and Riyan Parag of Rajasthan Royals during the IPL 2020 match at the Dubai International Cricket Stadium | iplt20.com

Rahul Tewatia and Riyan Parag stole a thrilling five-wicket victory for Rajasthan Royals against Sunrisers Hyderabad in the IPL 2020 match in Dubai.

Rashid Khan was the pick of the SRH bowlers (2/25) but he was smashed for 14 runs in the 18th over, including three consecutive fours by Tewatia. Khaleel Ahmed, too, chipped in with two wickets.

RR's chase began on a disappointing note yet again, being reduced to 26/3 inside the powerplay. Comeback man Ben Stokes, who was sent out to open, was dismissed for 5, while Jos Buttler made 16. With skipper Steve Smith run out for five, Sanju Samson played cautiously for 26, before he fell to Khan. Robin Uthappa briefly shone, picking up a six and a four but was adjudged LBW to Khan for 18.

Thereafter, it was a Tewatia-Parag show.

Earlier, opting to bat after winning the toss, SRH managed to put up 158/4, thanks to an impressive fifty from Manish Pandey, who struggled initially but finished with two fours and three sixes in his 54 off 44 balls.

He had a partnership of 73 off 10 overs for the second wicket with skipper David Warner (48 off 38 balls), who also looked scratchy and struggled for timing.

Kane Williamson (22 not out off 12 balls) showed his class briefly at the end, including a one-handed straight six off Royals' best bowler Jofra Archer (1/25 in 4 overs) and ended with another off the last delivery of the penultimate over.

The young Priyam Garg (15 off 8 balls) also made a valuable little contribution in the final few overs of the innings.