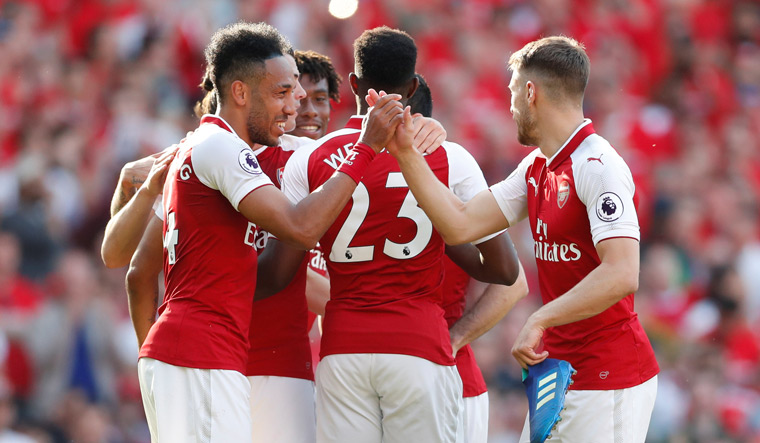 Arsenal's talismanic striker Pierre-Emerick Aubameyang scored twice to ensure his club's 2-1 FA Cup victory (14th in total) against Chelsea at the Wembley Stadium on Saturday. His first goal came in the form of a penalty, cancelling out Christian Pulisic's early opener, and the second was a skillful flourish and a dink over goalkeeper Willy Caballero that emphasised the striker's reputation as one of the deadliest finishers in world football. For Chelsea, it was an unlucky night. Early in the game, captain Cesar Azpilicueta and Pulisic retired with injuries, and their situation was not helped by a controversial red card sending off of midfielder Mateo Kovacic in the second half.

The game was seen as a greatly anticipated match-up between two young managers who took charge of their clubs in tumultuous times. Chelsea's all-time top-scorer, Frank Lampard had exceeded expectations in his first season back at the west London club as manager. The former midfielder was unable to make any signings when he took charge a year ago due to a FIFA transfer ban, with Pulisic the only addition to the squad. But Lampard led Chelsea to a fourth-place finish to ensure Champions League qualification and now has an early chance to pick up a cup.

Mikel Arteta left Manchester City, where he was Pep Guardiola's assistant, in December to replace Unai Emery after the north London club struggled in the post-Arsene Wenger era. Arteta was Arsenal captain for two of Wenger's seven FA Cup wins. While Chelsea has already secured European qualification, winning the FA Cup is the only route into the Europa League for Arsenal after finishing eighth in the Premier League 10 points behind Chelsea.

"We have worked so hard since I joined here to try to bring this club back to winning titles, so if we can achieve that I will be delighted," Arteta said. "But not for myself. For the players and the club. They've been through some very difficult moments in the last few seasons and as well for our fans, because they really deserve ... some joy and some nice moments."