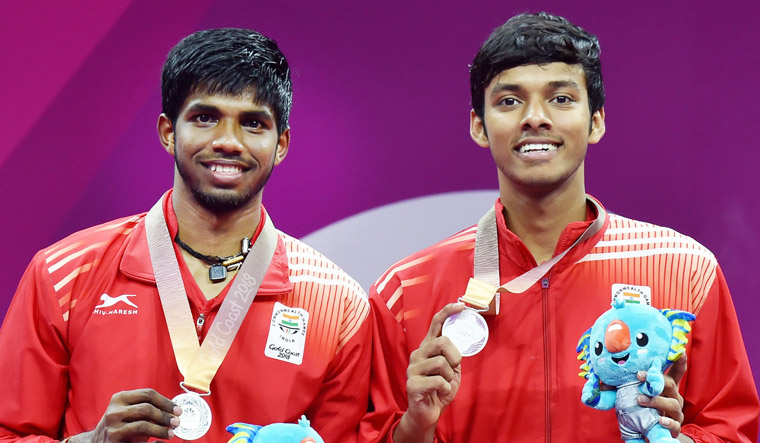 India's top men's doubles pair of Satwiksairaj Rankireddy and Chirag Shetty and men's singles player Sameer Verma were on Tuesday recommended for the Arjuna award by the Badminton Association of India (BAI).

The world no. 10 Indian pair are currently the front-runners to qualify for the Tokyo Olympics. Satwik and Chirag have made rapid strides in international badminton, having won their maiden Super 500 event at Thailand Open and finishing runners-up at the French Open Super 750 tournament last year.

The duo played a crucial role in earning India the historic gold medal at the 2018 Commonwealth Games, where they also won the men's doubles silver.

Sameer, the 2016 Hong Kong Open finalist, didn't have a stellar run last year but he was in sizzling form in 2018, winning three titles to reach a career-best ranking of world no. 11. His dazzling run also earned him a place in the BWF World Tour Finals 2018, where he reached the semifinals.

Murlidharan has coached the likes of Vimal Kumar, Rupesh Kumar and Sanave Thomas, among many other renowned former players, immensely contributing to the growth and development of the sport.

He has also been a recipient of the Meritorious Service Award given by the Badminton World Federation (BWF) in 1996.

Former Indian coach, Babu has trained the likes of Chetan Anand, Saina Nehwal and Parupalli Kashyap at the SAI, Hyderabad Centre. He is now working with young badminton players in Secunderabad.

For the Dhyanchand Award, the national federation has recommended Pradeep Gandhe and Manjusha Kanwar.

Gandhe is a two-time Asian Games bronze medallist. He had moved into administration of the sport after retiring and also served as Maharashtra Badminton Association (MBA) president.

She now promotes sportspersons in her current role as a Sports Promoter with Indian Oil.

"BAI has diligently assessed the performances of the athletes and coaches during the last four years before sending the names to the Sports Ministry for the recommendation," the BAI said in a release.