‘Get us back home to our families,’ pleads RKFC’s English striker Higginbotham

The lockdown is mentally draining says the striker 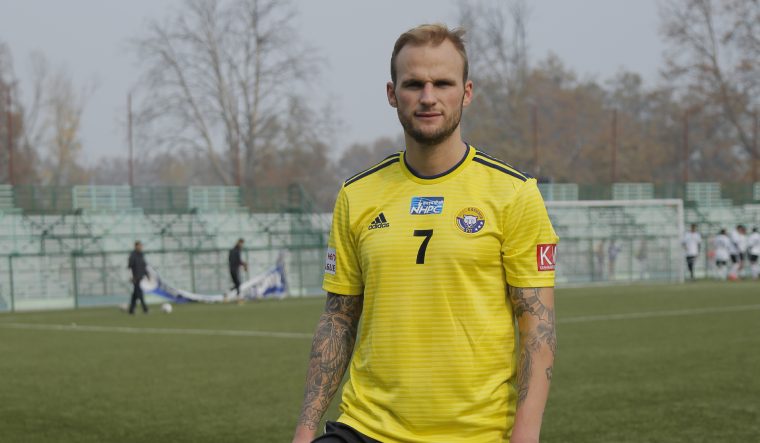 This is Englishman Kallum Higginbotham’s first season “abroad” and what an experience it is turning out to be so far. The 30-year-old striker made his move from the Scottish League,  appearing for Dunfermline Athletic to the I-League this season, finding the Indian football league as his chance to fulfil the “burning desire to play abroad”, and was persuaded by Real Kashmir Football Club manager David Robertson to make the leap of faith. He landed only to witness the communication blockade being enforced in Jammu and Kashmir, but soon enough Kallum settled down to training with the rest of the players and the competition.

The team was in the midst of playing its home games in Srinagar when the COVID-19 threat led the Indian Government to enforce a three-week-long lockdown. With no air, rail or road movement allowed within or internationally, Kallum along with a few teammates finds himself stuck indoors. It’s not easy for anyone to restrict themselves in this manner, more so for a sportsperson, and he would rather be home with his family when the coronavirus pandemic struck.

Kallum’s frustration with the way things are is palpable. He was unfazed by the idea of playing for a relatively new club from the valley which has witnessed violence and terrorism for decades. Speaking to THE WEEK, he said, “The lockdown is very hard. Mentally, it is draining. Every day is the same, the scenery is the same, you see the same people every day. It’s becoming very tough and hard to deal with. Of course, my family are worried and I’m worried about them. I have a young family at home who need their daddy to be there and look after them, and I can’t. I feel useless.”

He has a fiancé back in Edinburgh, and she is working as well as taking care of their two young kids. In normal times, being away from a family is tough but in these times it is even worse. All he wants is for the Indian government to get the foreign players “back home to their families”.

While the lockdown is to end on April 14, there is no guarantee so far that it will and international flights will be restored. The uncertainty has added to Kallum’s anxiety so much so that he has even started skipping his first meal of the day to cope with the present restrictions. “This is the hardest thing to deal with—not knowing when I can return. If there was a set date, I could then set my mind to that and have something to focus on, but because there is no date, it’s mentally draining it really is.”

From the team hotel in downtown Srinagar that is owned by the Snow Leopards’ co-owner Sandeep Chattoo, Kallum gives an insight into life during the lockdown. “No one in the hotel has the virus or symptoms. We have been on lockdown now for three weeks. We haven’t left the hotel and no one has come into the hotel. That was the boss’s orders, so distancing hasn’t been a problem, but majority of the time, everyone is in their rooms. So we don’t see much off each other.”

While the rest of the country has managed to stay connected with near and dear ones during the lockdown, the situation is slightly more challenging in Kashmir, with the Union Territory still being allowed only 2G network. Remaining connected with his family was the brightest spark in his day, but with slow internet speed even that was a challenge initially.

“I’m fortunate enough that I have my hotspot with my Indian SIM card to enable to contact home because before that it was very frustrating. The internet was very, very slow and would always disconnect, which was hard when trying to contact home, the data isn’t much quicker but at least it doesn’t disconnect.”

Kallum signs off with hope and a request for a way to get him back home to the UK.