Goa, ATK, Bengaluru and Chennai find themselves in familiar territory 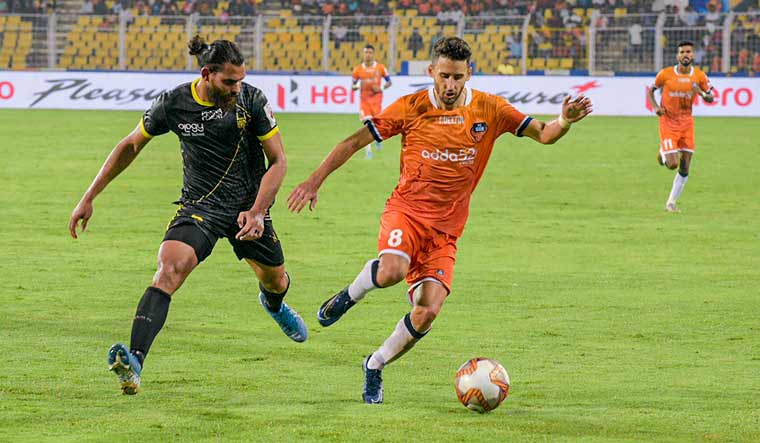 Players of FC Goa and Hyderabad FC in action during their ISL match at Fatorda, Goa | PTI

They have all been here before. As the Indian Super League caravan rolls into the playoffs stage of its sixth season, three former champions and a two-time finalist are gunning for the crown again. It has been one heck of a ride and going by the quality of football possessed by these four, the final stages should be fun, too. But before the grand finale, each team will have to prove its mettle over two legs in the playoffs.

FC Goa has already bagged the inaugural League Winner's Shield, awarded to the team that finishes at the top of the group stage. Goa also becomes the first Indian team to qualify for the group stage of the AFC Champions League, Asia's premier continental club football event, after the Asian football body agreed to give India the spot.

Goa's dominance in the league stage (46 goals scored and only three losses in 18 matches) had carried on from the team's incredible form the year before when it lost to Bengaluru in the final. Bengaluru, though, has not been as impressive as Goa, coming into the semifinal stage off a three-game winless streak.

And while ATK is back to winning ways with the return of coach Antonio Habas, who helped them win the inaugural ISL title, the story of the season has to be the resurgence of Chennaiyin FC. Having won just one of its first seven games, the team rallied to make it to the top four, reminiscent of the incredible run in 2015, when the team incredibly went from the bottom of the table to eventually become champions.

Both Chennaiyin and FC Goa, who will face off in the first fixture, arrive in the playoffs without the coaches that started the season with them. A mid-season managerial change rarely does more than limit further damage when all hope seems lost. But both teams have cruised ever since their old bosses left.

For Goa, the sacking of Sergio Lobera will remain the single riskiest decision by any team this season. The Gaurs were at the top of the table when the owners decided to axe Lobera, under whom the club had become a force to reckon with over the last few years. Internal issues led to the rift between the board and the Spanish coach, who left with three league games to go.

Despite Lobera's sudden departure, Goa continued its marauding run, scoring 14 goals in the last three games. With beautiful football played by one of the strongest ISL squads of all time, the Goan side will look to pull out all the stops to win the elusive ISL trophy. Its arsenal of dangerous goal-scorers (Ferran Corominas, Hugo Boumous) and passers (Ahmed Jahouh, Carlos Pena, Lenny Rodrigues) will come in handy.

Standing in Goa's way is an old foe in Chennaiyin FC. Players from both sides infamously had a long-drawn scuffle in an ill-tempered 2015 final that the Chennai side won. Since then, fans of the two teams have never got along with each other, and though the squads have changed, there is still bitterness among the players.

As strong as Goa are, Chennaiyin's killer instinct and current momentum could upset the table toppers. From champions in 2017 to the bottom of the table in 2018, things were about to get even worse when the team was struggling at ninth on the table by December. Out went title-winning head coach John Gregory and in came the former Bolton Wanderers manager Owen Coyle.

Coyle's arrival fired up the team's engine as he ditched the defensive style of play for a far more direct attacking one. The team is now on an eight-match unbeaten run it is the frightening counter-attacking pace that could catch the Goan defence off-guard.

Chennaiyin's Nerijus Valskis will be the player to look for. His sharp shooting skills has resulted in 13 goals and could pose a threat to the Goan back four, who has looked shaky at times this season. All in all, this headlining fixture looks to be a goal-fest.

In the other game, two Spanish head coaches with ISL titles under their belt come head to head. Bengaluru FC's Carles Cuadrat, who won the title last year with a well-rounded squad, goes up against ATK's Antonio Habas Lopez, whose side now looks more balanced than Cuadrat's.

It comes as no surprise that Bengaluru is in the top four yet again, but the path has not been easy. Like Barcelona's over-reliance on Lionel Messi, Bengaluru is heavily dependent on skipper Sunil Chhetri to deliver the goods. The best example of this was in one of the highly awaited clashes against Goa in January when Chhetri's lone brilliance with a brace won the game for Bengaluru.

Bengaluru's saving grace has been their defence, led by goalkeeper Gurpreet Singh Sandhu (10 clean sheets and only 13 goals conceded) and their ability to hold on to the ball for long periods. But the biggest letdown has been in attack, where neither Ashique Kuruniyan nor Udanta Singh has really complemented Chhetri.

Incredibly, the side has scored the third-fewest goals (22) this season. But considering the quality they possess in every department, it will probably take a big game like this for the men in blue to come out all guns blazing. Cuadrat knows how to slowly chip away at opponents, and over the course of two legs, this will come in handy.

On the other hand, he also comes up against a master tactician in Antonio Habas, whose frequent formation tweaks leave opponents baffled. Habas returned this year and made some impressive signings that have rejuvenated the middling club.

Statistics may not always reveal much, but in ATK's case this season, it certainly reflects how the team operates. ATK has scored the second most number of goals (33), conceded the second-fewest goals (16), but at the same time, had the least number of passes and ball touches of all the teams. When most top teams laboured mid-season, the ATK machine roared the loudest with its ferocious attack backed by intelligent defending.

And though the last two games ended in disappointment, when up against a stubborn Bengaluru defence, ATK could surely punish even the slightest of errors, as frontman Roy Krishna has so often done. Because when you are surrounded by the likes of Edu Garcia, David Williams and Javier Hernandez, the chances to score will flow.

Time will tell for how long the teams with the two best defensive record can hold out against each other. Their fate will be decided over about 180 minutes of football. The crucial away goals rule could also play a major role in deciding who advances.

All in all, four highly engaging games involving four high-quality teams are in store for us before the summit clash on March 15.