Why did Warner mention Kohli after winning Allan Border Medal 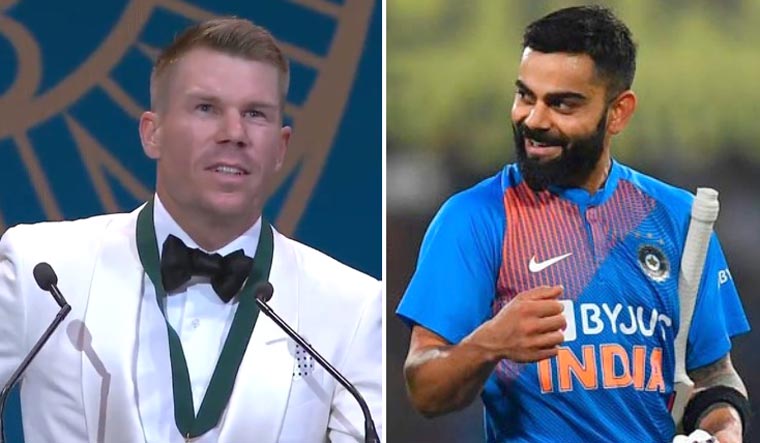 Life came to a full circle for Australian opener David Warner on Monday, when he won the Allan Border Medal beating teammate Steve Smith by one vote in their first season following the ban that brought their rollicking careers to a one-year halt.

Then vice-captain and captain—Warner and Smith—were each banned for a year by Cricket Australia and opener Cameron Bancroft was suspended for nine months for their involvement in the ball-tampering scandal during a Test match against South Africa in Cape Town in March 2018.

Warner, too, confessed to his wrongdoing, but let his bat do the talking for him as he emerged as the highest run scorer in IPL 2019 with 692 runs, at an average of 69.2 and strike rate of 143.86. He was also the second highest run-scorer in the ICC World Cup last year—647 runs, behind only to Rohit Sharma.

After a lacklustre Ashes, he bounced back in style in T20Is against Sri Lanka and Pakistan, scoring his first T20I century. In the Tests against Pakistan, too, Warner was in red-hot form, scoring a career-best 335* at Adelaide Oval.

"I know I have let you guys down in the past. It's just been remarkable to come back," Warner was quoted as saying by foxsports.com.au in his speech after getting the award for the third time, after 2016 and 2017.

"With the World Cup, to not go the whole way was disappointing. The Ashes, retaining that was fantastic. I obviously didn't turn up and I apologise for that. But I really had the hunger and determination to come back and do the best for our team.

"To come back and have a summer like that and just contribute, it really put a smile on my face, and I hope it did for you guys as well," Warner said.

"To go back there and be able to be reintegrated into grassroots, go back to grade cricket, put a smile on people's faces that way... it really helped me get to where I am today.

"Without that, getting cricket taken away from you—something I've always dreamt of—it really, really hurt," he said.

"Having three daughters at home, looking up to guys like (Steve Smith) 'Smithy', (Pat Cummins) 'Cummo', playing cricket in the backyard they're yelling out Virat Kohli's name.... But these are the smiles on kids' faces that we put on," Warner said. His wife, Candice, had, in fact, posted a video then showing their daughter saying she wants to be like Kohli.

The Indian skipper, interestingly, won the ICC 'Spirit of Cricket' award for his gesture of trying to stop the Indian fans from booing Smith during a World Cup match. Smith was returning to international cricket after the one-year suspension.

“That moment was purely understanding an individual's situation. I don't think a guy who is coming out of a situation like that needs to be taken advantage of,” Kohli had said about the incident.

“You can sledge, can have have banter on the field, you say things to the opposition in wanting to beat them. But booing someone is not in the spirit of any sport, I don't endorse it.”

Despite the rivalry between India and Australia, there's mutual respect between Kohli and players like Warner and Smith.