Thiem will take on Alexander Zverev in the semifinal on Friday 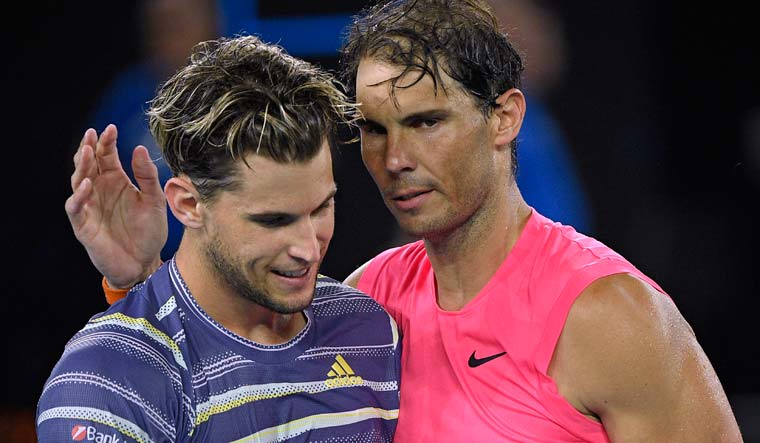 The last time they played on hard courts—at the 2018 US Open quarterfinals—it was a five-set marathon.

And it seemed that today's match will go the same way.

Both baseline-huggers, it became a slugfest before Nadal managed to open some doors on the Thiem serve in game eight of the first set and he broke with a perfect lob from the back of the court.

But Thiem came roaring back, breaking back with a ripping cross-court return. He saved a set point to take it to a tie-breaker where he stunned Nadal to seal a one set lead.

Nadal, dripping in sweat on a steamy Melbourne night, attacked in the second set and Thiem lost his serve to love to go 3-2 behind.

But the Spaniard, the 2009 champion, became riled when issued with a warning for taking too long to serve and it rattled him, sending down a double fault as Thiem squared the set at 4-4.

Nadal saved a set point and it went to another tie-break where Thiem prevailed at the crunch thanks to a lucky net cord.

The third set was similarly tight, with no breaks until Nadal teased some errors from Thiem as he served to stay in the set, pumping his fists in celebration.

But when Nadal shanked a forehand in the third game of set four to be broken, the momentum swung back to the Austrian. He lost his nerve serving for the match at 5-4 before finally getting over the line in a tie-break for a famous victory.

Thiem will take on Alexander Zverev in the semifinal on Friday. The seventh seed was thrashed in the first set but recovered to win 1-6, 6-3, 6-4, 6-2 against Stanislas Wawrinka.

Awaiting the winner of that clash will be either seven-time champion Novak Djokovic or six-time winner Roger Federer, who meet in the other semifinal.