Rajkot ODI: Dhawan hit on rib-cage, Chahal in as substitute

Dhawan was hit in the 10th over of the Indian innings, by a Pat Cummins bouncer 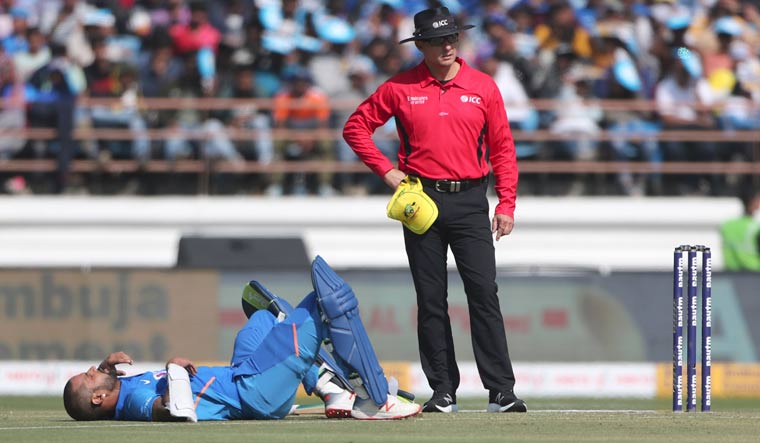 Senior India opener Shikhar Dhawan joined the list of injured players after Pat Cummins bouncer hit him on the rib cage while batting in the second ODI against Australia, in Rajkot on Friday.

Incidentally, it was a Cummins bouncer in the first game that had left Rishabh Pant concussed and out of the second match after being rushed to hospital for a precautionary CT scan.

"Shikhar Dhawan got hit on the rib-cage on his right side. He will not be taking the field today. Yuzvendra Chahal is in as his substitute," a BCCI media release said.

Dhawan was hit in the 10th over of the Indian innings. While he was in considerable pain and needed medical attention, he decided to carry on batting, scoring a fluent 96 in India's total of 340 for six.

Ironically, it was against Australia in the World Cup that Dhawan had sustained a fractured thumb after being hit by a rising delivery from Nathan Coulter-Nile.

Call it a coincidence, Dhawan was also the top-scorer in that game when he scored 117 in India's easy victory. But the fractured thumb ruled him out of the tournament for good and was out for two months.

He came back against West Indies and had a lean patch before sustaining a deep cut on his knee during a Syed Mushtaq Ali Trophy game. He had to be rushed to a medical facility where he required 27 stitches and was out for another month.

The left-hander made a comeback in the domestic cricket, scoring a hundred for Delhi against Hyderabad in a Ranji Trophy game in seaming conditions.

Just when he got his mojo back with three successive half-centuries, the 34-year-old is now facing another injury scare.

It is expected that Dhawan will be taken for a precautionary scan to detect if he has had a rib fracture which could mean another lengthy break from the game.