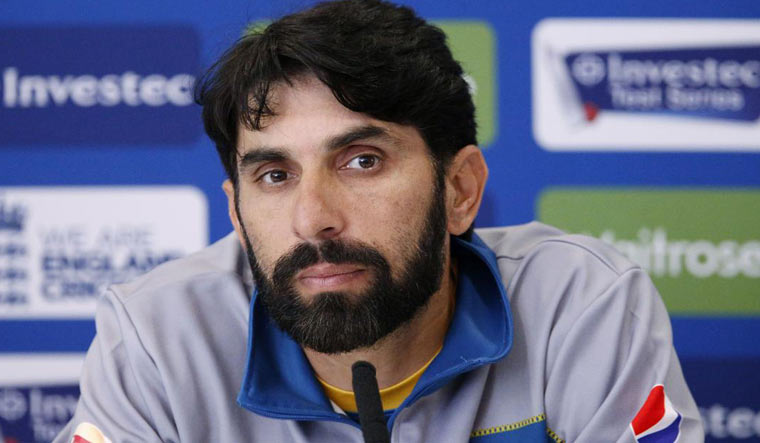 Pakistan's head coach Misbah-ul-Haq was at his sarcastic best while answering questions post the 0-3 hammering in the T20 series against a second-string Sri Lankan side. He even lost his cool once during the press conference.

The 46-year-old former captain, while fielding questions from the media at the Gaddafi stadium in Lahore, took responsibility for the humiliating defeat.

"Yes, I take responsibility for the series defeat. It is very disappointing and we played poorly. But this is same team which made us number one. Same players who have been playing for around three years.

"If you want to blame me, fine. I have been just 10 days on the job and yes about changes, I asked a right-hand batsman to start batting left-handed and told a left-hand bowler to start bowling right-hand, right," he said.

Misbah also snapped when a journalist asked about the poor show by captain and wicketkeeper Sarfaraz Ahmed, who dropped catches and missed stumping chances.

"Yes, only the wicketkeeper is not playing well, the rest of the 10 players are doing so well," he replied.

Misbah said the hammering has opened his eyes to the fact that there is something seriously wrong with the country's cricket system.

Misbah, who has faced criticism since becoming the first man in Pakistan cricket to hold two top posts of head coach as well as chief selector, also rued the lack of talent at domestic level.

"This series has been an eye-opener for us and everyone else. These same players have been around for a while now. More or less the same team which made us number one and has been playing together for around three to four years now," Misbah said after Pakistan lost the third and final T20I in Lahore on Wednesday.

"The result of series is also an eye-opener for our system as well. If we can lose to a side without its main players how did we think we were number one," he added.

He said Sri Lanka completely outplayed his side in all departments of the game.

"We were poor and not even at par in all three departments against them. Sri Lanka outclassed us in every department, it was an almost one-sided series," he said.

Asked about the poor form of young leg-spinner Shadab Khan, Misbah indicated the lack of talent in the country in this department.

"But tell me another wrist spinner who we can select to replace Shadab. Name one deserving wrist spinner on domestic circuit whom we did not select," he retorted.

Asked what was wrong with the batting and why they struggled against spin, Misbah remarked: "Yes, it is an eye-opener for us and should also be one for you (media) as well. You need to think now before writing they are finished without considering their past performances.