Colin Kaepernick: 'Taking a knee' for the black community in US 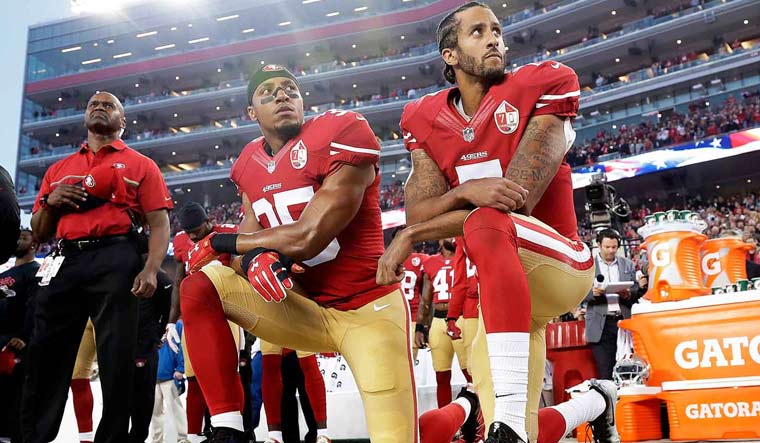 The Super Bowl, the biggest event in American sport, has come and gone, but nobody seems to care about the football. Already dubbed “The worst Super Bowl in history”, the game saw lacklustre performances from both teams. While the L.A. Rams didn’t look worthy of a team in the finals, Tom Brady’s New England Patriots didn’t exactly bring their A game. But they didn’t need to, as they walked away with a 13-4 win, in the lowest scoring final in history, for a record sixth title.

One player, however, was at the centre of attention, and he was not even playing in the final. In fact, he had not played all season. Colin Kaepernick, former San Francisco 49ers quarterback, was all the internet was taking about [apart from shirtless Adam Levine and Maroon 5’s half-time fiasco] as the hashtag #ImWithKap started trending in the lead up to the game and afterwards.

Kaepernick first courted controversy way back in August 2016 when he started sitting during the American national anthem before pre-season games for the 49ers. He told the media that his actions, which came at the height of the Black Lives Matter movement, were in protest against the racism and police brutality that was still prevalent against the black community.

“I am not going to stand up to show pride for a flag in a country that oppresses black people and people of colour. To me, this is bigger than football, and it would be selfish on my part to look the other way. There are bodies in the street and people getting paid leave and getting away with murder,” he said.

He then started kneeling or “taking a knee” during the national anthem as he felt it maintained his respect for military veterans while continuing his protest.

In the 2016 season he knelt during every game. His actions invoked mixed response. While the conservatives, naturally, blasted him for being unpatriotic and disrespecting the country, there was also widespread support.

During the last pre-season game, his teammate Eric Reid knelt with him and during the 2016 season players from various teams knelt during the Star Spangled Banner in solidarity with Kaepernick.

Kaepernick made yet another political statement when he sported socks with pigs in police uniform during a training session. The photo quickly went viral and Kaepernick had to clarify his message with an Instagram post that said he only targeted ‘rogue cops’ with his socks.

In March 2017, just before the start of the season, Kaepernic opted out of his contract with the 49ers and became a free agent. However, none of the 31 other teams in the league signed him for the 2017 season despite the fact that he had an enviable record, having led his team to a Super Bowl and the NFC Championship. But his absence did not subdue the protests on the pitch, with players continuing to kneel during the anthem.

Donald Trump, being Donald Trump, added his two bit when he took a potshot at the protesting players with a slew of tweets and at a rally saying, “Wouldn’t you love to see one of these NFL owners, when somebody disrespects our flag, to say, ‘Get that son of a b***h off the field right now, out, he’s fired. He’s fired.”

Spurred on by the President’s comments, the following weeks saw unprecedented participation with over 200 players kneeling during the anthem. Most teams stood arm in arm in a show of support while three teams remained in the dressing room until the anthem had been sung.

Various players, coaches and teams issued statements against Trump’s comments but, in the process, the original message behind Kaepernick’s protest seemed temporarily lost as the opposition became primarily against Trump.

But the national anthem protests were not limited to the NFL. Kaepernick’s actions inspired people across the country. USA women’s soccer player Megan Rapino knelt before a game, so did Bruce Maxwell of the Oakland Athletics in the MLB. Three members of the West Virginia Tech volleyball team, and 19 members of the band at East Carolina University all ‘took a knee' before games. The protests trickled all the way down to high school football. Players from the Withrow High School joined the protest while two players of the Victory & Praise Christian Academy were immediately removed from the football team after kneeling during the anthem.

The protests reached Capitol Hill, with U.S. Representatives Sheila Jackson Lee and Mark Pocan kneeling on the floor of the House of Representatives. Even former president Barack Obama lent his support when he said that Kaepernick was exercising his constitutional right to protest and had created conversation on an important issue.

Some of the biggest stars from Hollywood and the music industry rallied behind Kaepernick. Stevie Wonder took a knee as he performed at the Global Citizens Festival in New York while Kristen Bell, Mark Ruffalo, John Legend, Pharrell Williams, Ava DuVernay, J Cole and countless others took to social media to tell the world that they were going to #TakeAKnee. Beyonce and JayZ have been vocal about their support as well. While Queen B presented Kap with the 2017 Sports Illustrated Muhammad Ali Legacy Award, her husband, reportedly, refused to perform at the 2018 Super Bowl’s half-time show. The couple’s latest hit “APE S**T ” also had an NFL-Kaepernick reference:

I said no to the Super Bowl: you need me, I don't need you

Every night we in the end zone, tell the NFL we in stadiums too

But, even with support pouring in, Kaepernick claimed he had received multiple death threats and a fan poll showed that he was the most hated player in the league. He continued to be without a team and filed a grievance case against the NFL owners for colluding to keep him out of the league because of his protests. The case is still in court and will go to a hearing soon. 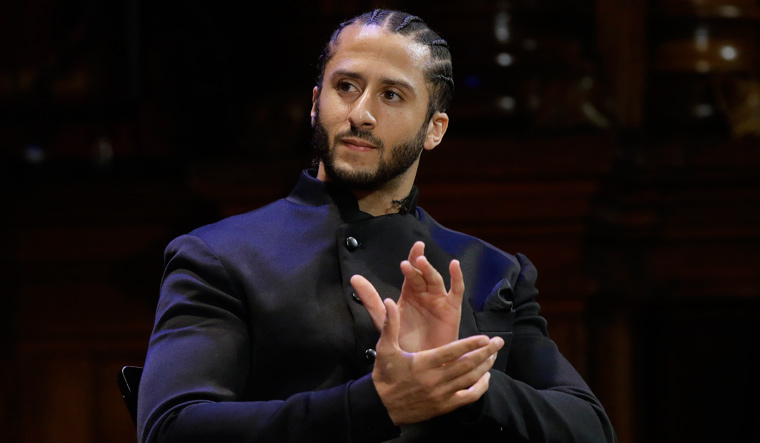 The NFL owners also caved into mounting pressure from President Trump when they adopted a policy that fined or suspended players who did not stand for the national anthem. However, they agreed to suspend the policy following protests from the NFL Players Association.

Despite not being able to play, Kaepernick has immersed himself in his activism and continued fighting for the cause. He has already made good on his promise to donate a million dollars to organisations that work for causes ranging from education to social justice.

He has started the “Know Your Rights Camp” which organises free seminars for youth from disadvantaged backgrounds that guide them on everything from self-empowerment and American history to legal rights and the importance of education.

Kap’s good work did not go unnoticed. He was named Amnesty International Ambassador of Conscience, GQ's Citizen of the Year for 2017, and awarded the 2017 Sports Illustrated Muhammad Ali Legacy Award. He came on the cover of TIME magazine, was named TIME Person of the Year 2017 and made the TIME List of 100 Most Influential People in America.

In 2018, Nike named Kaepernick the face of its iconic “Just do it” tagline’s 30th anniversary ad campaign which also included the likes of LeBron James and Serena Williams. The poster, which came out three days before the start of the 2018 season, is a close up of Kaepernick with the lines “Believe in Something. Even if it means sacrificing everything.” The video for the campaign titled “Dream Crazy” with Kaepernick as narrator was released a few days later. The campaign set social media ablaze, quite literally, as some people started posting videos of themselves burning Nike merchandise, peeved at the brand for choosing Kaepernick. But the Nike boycott hardly seemed to make a dent as the brand’s stock prices soared in the months following the ad.

In the lead up to this year’s Super Bowl, Rihanna and Pink refused to perform at the half-time show. Even Maroon 5, who eventually got the gig, were asked not to take it by many of their fans. Cardi B, who had collaborated with the band on their 2018 hit single Girls Like You, made her stand clear on a possible appearance saying, “I got to sacrifice a lot of money to perform. But there’s a man who sacrificed his job for us, so we got to stand behind him.”

There were calls for a boycott of the Super Bowl to support Kaepernick, and boy did it work. This year’s final had the lowest TV ratings in the past decade. People started posting pictures on social media wearing Kaepernick’s number 7 jersey and #ImWithKap was trending along with the #7Challenge, where people donated 7 dollars to Kaepernick’s Know Your Rights Camp and then nominated 7 others to do it too. America’s biggest names also remained steadfast in their support for the quarterback. Rihanna, rapper Common, supermodel Zendaya, along with Oscar-nominated director Ava DuVernay took to Twitter to express their solidarity with Kap, while basketball greats LeBron James, Steph Curry and Kevin Durant were all seen sporting Kap’s jersey.

Kaepernick started alone and now he has thousands kneeling with him. His actions got America talking about systematic oppression, white privilege and police brutality. By taking a knee, he got everyone from the President to students in high school, to voice their opinions. He has refused to back down even to the might of the biggest and richest sports league in the world. He could easily have just played football, collected his multi-million dollar pay cheque and used Instagram or Twitter to voice his protests like countless celebs. But Kaepernick chose to put everything on the line—his career, money, safety—to sacrifice everything, for something he believes in.

Kaepernick is not the first sportsman to use the field to take a stand, or to make a political statement. John Carlos and Tommie Smith’s black power salute on the podium at the 1968 Olympics and Muhammed Ali’s refusal to enlist in the army with the now legendary “I ain’t got no quarrel with them Vietcong, no Vietcong ever called me nigger” are probably the most famous instances of American athletes protesting for civil rights. And Kaepernick will definitely go down in history right alongside these legends.