Sun on Earth: US scientists produce fusion power that replicates the sun's energy 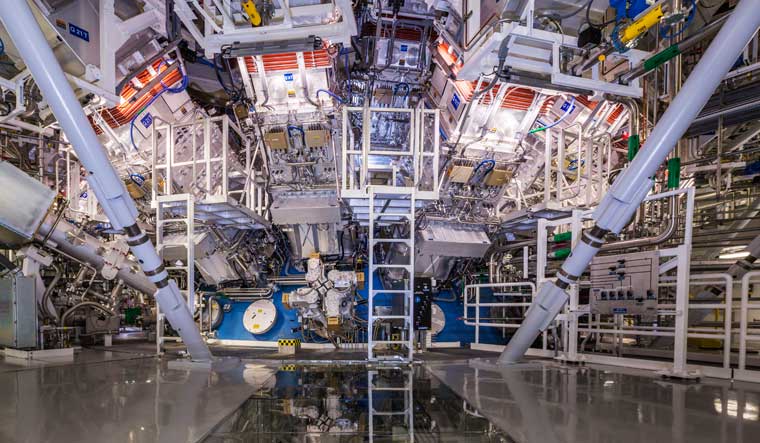 The scientists at the Lawrence Livermore National Laboratory (LLNL), located in Livermore, California have achieved a major breakthrough on nuclear fusion that releases power similar to that of the Sun.

Researchers working on a fusion experiment bombarded a tiny pellet of hydrogen plasma with lasers to produce net energy gain that could provide an abundant zero-carbon alternative to fossil fuels, says Financial Times which first reported the experiment.

Nearly 200 lasers directed at a tiny capsule of hydrogen created a plasma around the capsule, which led to an implosion for the fusion reactions to take place.

Nuclear fusion--the same process that powers the sun and stars--is considered as the future energy source as it produces little waste and no greenhouse gases. The new nuclear fusion reactor has created more energy than the previous method 'magnetic confinement fusion' which uses powerful magnets. The magnetic field prevents the particles from coming into contact with the reactor walls, which will dissipate the heat of the nuclei and slow down its movement.

The nuclear fusion reaction resulting in a net energy gain creates a process producing commercial amounts of clean energy that could help end dependence on fossil fuels. The process called inertial confinement fusion could provide a cheap source of electricity. Scientists in many countries have been working since at least the 1950s towards this goal using different methods.

A technician reviews an optic inside the preamplifier support structure at the Lawrence Livermore National Laboratory in Livermore, California | via AP

Fusion works when nuclei of two atoms are subjected to extreme heat of 100 million degrees Celsius (180 million Fahrenheit) or higher leading them to fuse into a new larger atom, giving off enormous amounts of energy. But the process consumes vast amounts of energy and the trick has been to make the process self-sustaining and get more energy out than goes in and to do so continuously instead of forbrief moments.

When this is commercialised, which may take least 10 years, it would have additional benefits including the generation of virtually carbon-free electricity which could help in the fight against climate change without the amounts of radioactive nuclear waste produced by today's fission reactors

“If this is confirmed, we are witnessing a moment of history,” said Dr Arthur Turrell, a plasma physicist told Financial Times.

LLNL which has around 8,100 employees, is largely funded by the Department of Energy’s National Nuclear Security Administration.