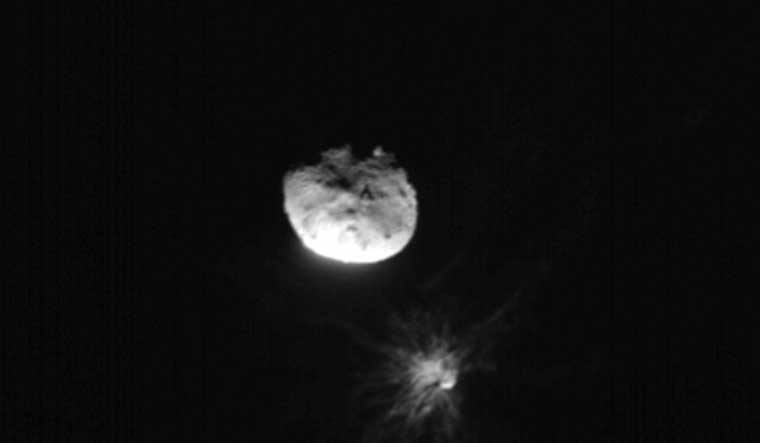 The view of Didymos, Dimorphos, and the plume coming off of Dimorphos after the Double Asteroid Redirect Test, or DART mission, purposefully made impact |Reuters

NASA has confirmed that its recent mission to alter the trajectory of an asteroid using a spacecraft was successful. The US space agency conducted the Double Asteroid Redirection Test (DART) last month which saw the spacecraft slam into an asteroid Dimorphos.

The astronomers used ground-based telescopes to measure the orbit change.

"This mission shows that NASA is trying to be ready for whatever the universe throws at us. NASA has proven we are serious as a defender of the planet. This is a watershed moment for planetary defence and all of humanity, demonstrating commitment from NASA's exceptional team and partners from around the world," NASA Administrator Bill Nelson said.

Before the demonstration, NASA could only bring about a minimal change in the asteroid's orbit of 73 seconds. However, the DART has surpassed this minimum benchmark by more than 25 times.

NASA also released data to confirm its claim, including new pictures from the Hubble Space Telescope and a small Italian spacecraft hovering near the asteroid.

Though neither Dimorphos nor Didymos posed a threat to Earth, the mission was deemed a perfect target to test deflection technology.

"This result is one important step toward understanding the full effect of DART’s impact with its target asteroid," said Lori Glaze, director of NASA’s Planetary Science Division at NASA Headquarters in Washington. "As new data come in each day, astronomers will be able to better assess whether, and how, a mission like DART could be used in the future to help protect Earth from a collision with an asteroid if we ever discover one headed our way."

Meanwhile, the investigation team is still acquiring data and the focus has shifted toward measuring the efficiency of momentum transfer from DART’s roughly 14,000-mile (22,530-kilometer) per-hour collision with its target.

A study will also be conducted into the 'ejecta,' the asteroidal rock displaced and launched into space by the impact. The recoil from this blast of debris substantially enhanced DART’s push against Dimorphos – a little like a jet of air streaming out of a balloon sends the balloon in the opposite direction.

"DART has given us some fascinating data about both asteroid properties and the effectiveness of a kinetic impactor as a planetary defence technology," said Nancy Chabot, the DART coordination lead from the Johns Hopkins Applied Physics Laboratory (APL) in Laurel, Maryland, in the statement.