US is supplying over 120 of the new drones 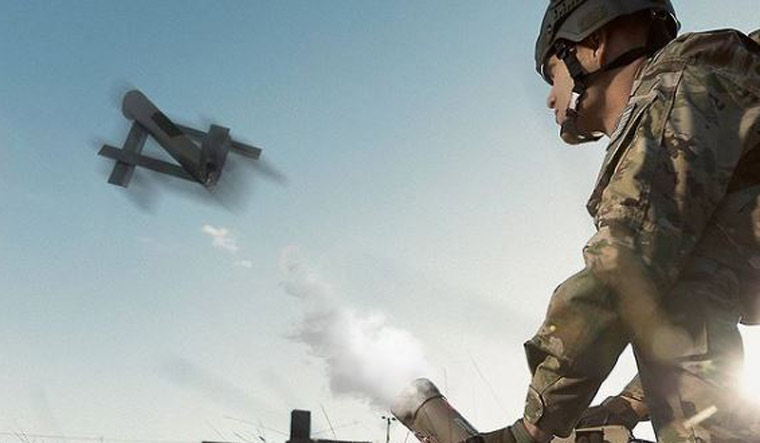 Representational image of a Switchblade UAV | Instagram handle of AeroVironment

Last week, US President Joe Biden announced a military aid package for Ukraine valued at $800 million. Since the US has announced multiple such packages in the last two months, it would have hardly made headlines. But it did, thanks to one seemingly obscure item on the list: The US would supply over 121 Phoenix Ghost tactical drones to Ukraine.

It was the first time the press had heard of such a system. The Biden administration had previously supplied hundreds of Switchblade drones to Ukraine.

The Switchblade comes under the category of 'loitering' or 'Kamikaze' munitions, which are designed to fly in search of targets to crash into. Unlike larger UAVs that can be equipped with missiles and light bombs, loitering munitions are expendable and are the weapon themselves. The lighter weight and simpler controls of UAVs like the Switchblade mean small squads of soldiers can employ them to destroy enemy personnel, equipment or vehicles.

So what do we know about the Phoenix Ghost?

Kirby claimed the “purpose [of Phoenix Ghost] is akin to that of the Switchblade… which is basically a one-way drone, an attack drone. And that’s essentially what this is designed to do”. He claimed the Phoenix Ghost would be suitable for operations in the Donbas region in Ukraine's east, which has flat and open terrain.

The Switchblade weighs less than 5kg and can be carried in a backpack by a soldier. It can fly about 10km searching for targets to crash into.

Retired Lt. Gen. David Deptula, a former US Air Force officer who is a member of the Aevex board, revealed some capabilities of the Phoenix Ghost.

Deptula told Politico recently the Phoenix Ghost “is a different type of aircraft, it’s a one-way aircraft that is effective against medium armored ground targets”. Deptula's revelation about the capability of the Phoenix Ghost to engage medium-armoured vehicles marks a significant upgrade over the Switchblade. Most variants of the Switchblade can only attack 'light' armoured vehicles like HUMVEEs or protected jeeps. Medium-armoured vehicles would include troop carriers that Russia is extensively using in Ukraine.

Politico reported the Phoenix Ghost “drone can take off vertically, fly for six-plus hours searching for or tracking a target, and operate at night using its infrared sensors, Deptula said. Phoenix Ghost has a longer loitering capability than the Switchblade, which can fly for less than an hour...”

Based on Deptula's revelations, it appears the Phoenix Ghost is a heavier weapon than the Switchblade and can hit a larger variety of ground targets, excluding tanks. The availability of the Phoenix Ghost would effectively free up more capable and larger assets such as the TB2 Bayraktar drones of the Ukrainian military for other tasks. The reference to vertical take-off capability, similar to a helicopter, would also have considerable utility in urban combat, where Ukrainian soldiers will be operating in constrained spaces.

The decision to supply a more capable mini-UAV also appears to confirm Ukrainian and US fears the Russian military is unlikely to leave the occupied areas soon.