$10 billion telescope to probe universe's past and present 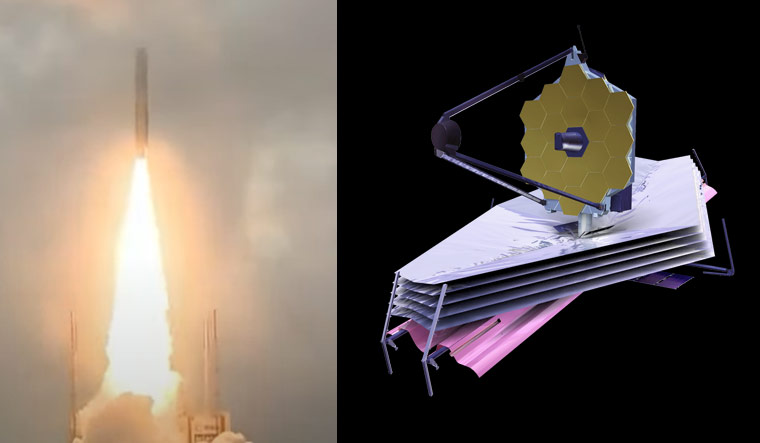 Screenshot of the launch of the Ariane-5 rocket carrying the James Webb Telescope, a rendering of the telescope in space | NASA

Humanity is set to upgrade its eyes in outer space, with the launch of the James Webb Space Telescope—the most advanced space telescope ever built and one of the flagship scientific missions of the 21st century. If you were impressed by the images taken by Hubble—which include the iconic “Eye of God” photo—Webb, 100 times more powerful, will take mankind’s sight in space to another level. All for the handy sum of $10 billion.

From Kourou in French Guinea, the European Space Agency had the honour of launching the JWST on board the Ariane-5 rocket. At around 17:50 IST, the Ariane-5 rocket took off. Moving at nearly 0.6 km/s, the rocket reached 84km before separating its solid rocket boosters. Over three minutes after launch, the fairing was shedded as the rocket left Earth’s atmosphere.

We have LIFTOFF of the @NASAWebb Space Telescope!

At 7:20am ET (12:20 UTC), the beginning of a new, exciting decade of science climbed to the sky. Webb’s mission to #UnfoldTheUniverse will change our understanding of space as we know it. pic.twitter.com/Al8Wi5c0K6

With a one million miles to go before it reaches its final orbit, the telescopes’ deployment includes dozens of sequences from the deployment of its solar array after the rocket’s upper stage separates to a mid-course correction burn and a host of manoeuvres. Webb has 344 single-point-of-failures—if any one of these components fails, it would severely impact the telescopes’ mission.

The telescope weighs 6,200kg and has a lifetime of ten years. This is much shorter than that of Hubble, which continues to operate over 30 years after its launch (thanks to regular maintenance by astronauts). But the JWST will be much further out into space than Hubble, with a perch at Lagrangian point 2 (L2), a location where both the Earth and Sun’s gravity cancel each other out, allowing it to orbit the sun with the earth behind it at all times. The shorter lifespan is due to the telescope’s ability to study infrared and ultraviolet light, putting it at constant exposure to dangerous light from the sun, reducing its lifespan. To protect itself, the telescope will deploy a sunshield the size of a tennis field that will guard it from the sun.

Webb will use a 6.5m-wide golden mirror to study the cosmos, with a capability of detecting light emitted from the first stars to be born in the universe, over 13.5 billion years ago. "They will be just little red specks," NASA senior project scientist and Nobel Prize winner John Mather told the BBC.

The telescope will study every phase of cosmic history, from the origin of the first stars to studying distant worlds in our solar system, searching for habitable exoplanets that could harbour liquid water.

Webb is an international collaboration between NASA and its partners, ESA (European Space Agency) and the Canadian Space Agency. Thousands of engineers and hundreds of scientists worked to make Webb a reality, along with over 300 universities, organizations, and companies from 29 U.S. states and 14 countries.