Explained: Facebook’s planned rebrand as it seeks to transition to the ‘Metaverse’ 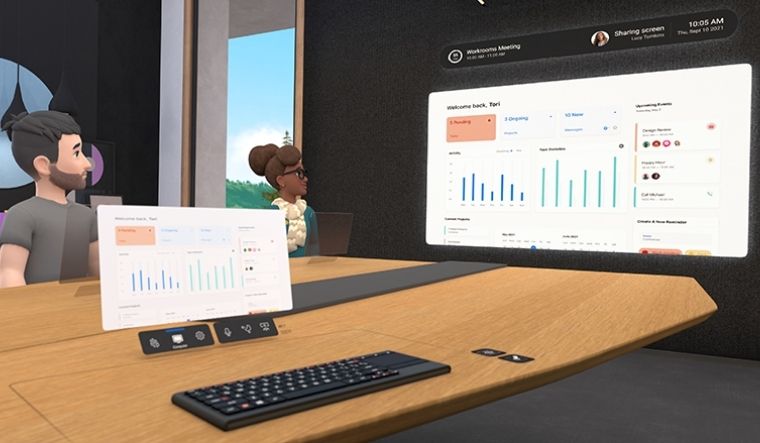 A representational image of a VR workplace shared on Oculus website. Facebook has been already using Horizon Workrooms internally for its meetings

Long before Facebook and its products became the definitive social networks of planet earth, founder Mark Zuckerberg was interested in creating a “metaverse”--a digital world blending the virtual with the real. As early as 2006, Zuckerberg was a guest speaker at an event featuring the founders of the original “metaverse”, the Second Life video game.

Zuckerberg may well be feeling to need to escape into such a metaverse as the company grapples with the negative fallout of an ex-employee turning whistle-blower and testifying before Congress that the social media platform knew its algorithms resulted in a harmful impact on society, and that its apps could be dangerously addictive for teenagers. And so, as Facebook faces regulatory scrutiny, the company plans to change its name—and go all out on its metaverse expansion plans.

Following Facebook’s renouncement that it would create 10,000 jobs in the EU to work on it s metaverse project, a Verge report said the firm planned to rebrand itself.

In Facebook’s announcement, the scale of the company’s vision for the Metaverse was hinted at.

“At its heart is the idea that by creating a greater sense of ‘virtual presence,’ interacting online can become much closer to the experience of interacting in person,” Facebook said in the announcement. “No one company will own and operate the metaverse. Like the internet, its key feature will be its openness and interoperability.”

Facebook’s problems are bigger than what a rebranding exercise can accomplish. Regulators the world over are seeking to exercise greater restrictions on what the platform can do, with a UK watchdog fining it $70 million for withholding information related to an ongoing antitrust oversight of its acquisition of GIF-sharing platform Giphy. In Ireland, regulators want to fine the company $42 million for breaching GDPR data collection policies. And in the US, Congress is increasingly discussing the prospect of amending protections given to social media platforms and reforming antitrust laws and data privacy regulations that affect Facebook.

Amid the challenge of dealing with regulators who feel Facebook has grown into too large and unregulated a monopoly, Zuckerberg’s eye on the “Metaverse” reflects his ambition to make the company a leader in what some are calling the future of the internet, or Internet 3.0.

To blur the lines between the virtual and the real world, Facebook already has an array of tools at its disposal. The company had already experimented with Facebook Spaces, which allowed users to interact in VR with each other using personalised animated avatars. The project that began in 2017 closed in 2018, however. But aspects of it carried forward into future Facebook VR and AR projects, including having avatars cut off at the waist. When Facebook promoted its Horizon Workrooms to encourage remote work, legless avatars made a return.

What is known is that virtual interactions will have far more immersion than the average video-call: Mixed-reality desk and keyboard tracking, hand tracking, remote desktop streamin and spatial audio are among the features Facebook's virtual workspaces. In addition, the company announced a $50 million investment to research and develop Metaverse-related products in September (with 10-15 year timeframe).

Backing Facebook’s foray into the virtual world is its 2014 acquisition of Oculus, then the best-known name in virtual reality. From a gadget originally seen as representing a new frontier for video games, Oculus products swiftly grew symbiotic with the Facebook ecosystem: Oculus Rift devices require a Facebook account to use and login.

Facebook already has a VR universe: Horizon worlds, built on the Unity engine and available on Oculus Quest and Microsoft Windows mixed reality headsets. Available only in closed-beta, it is expected to be expanded in the future.

One major challenge Facebook will face with virtual interactions is related to the challenges it faces with running a newsfeed-based social media platform: Bad user behaviour. Given that online griefing and trolling even in the form of comments and posts has proven to have devastating real-world consequences, how will a hostile interaction in VR be handled?

To demonstrate this, Facebook released a safety overview video showing how video recordings of all interactions between users would be made, and only shared with a human moderator including a team of safety specialists if a participant filed a complaint about inappropiate behaviour. Users would be able to enter a “safe zone” to “take a moment away from other people and your surroundings” as well as mute, block or report other users.

“Anyone who doesn't follow our code of conduct may be banned from Horizon,” the video narrator states.

Getting banned from Facebook’s virtual world may seem trivial at present. But a future universe where multiple Facebook products could be integrated together suggests many more interactions and consequences. Facebook’s upcoming “Diem” project, which aims to become the world’s definitive stablecoin, has already worried central banks across the world who fear it could challenge fiat currency. Virtual currencies are key to the in-world economies of any virtual world, allowing users to buy clothes, unique items or avail of services within the in-game world. Facebook’s planned token could end up spanning both the physical and virtual economies, giving it a significant role in the company’s future.

According to the Verge, Zuckerberg may discuss the coming name change at the company’s annual Connect conference on October 28. The rebrand could be similar to that of Google’s 2019 Alphabet exercise, which consolidated all of the search giant’s brands under the Alphabet umbrella. Facebook’s rebrand would make Facebook just one of many products under a parent company overseeing groups like Instagram, WhatsApp, Oculus, and more, Verge reported.

As Zuckerberg said in July, “We will effectively transition from people seeing us as primarily being a social media company to being a metaverse company.” A lot more may be happening behind the scene than just a simple corporate rebrand.

Facebook is not the only player in the Metaverse game. A collective movement to increase virtual immersion is likely, with existing examples like Fortnite’s in-game concerts (Travis Scott’s 15-minute in-game performance saw 12.3 million attendees).

But, as the world’s biggest social media network, Facebook already has part of the stack needed to create a compelling Metaverse for users to immerse into. The question is whether the growing distrust of the platform, regulatory hostility and bad PR will affect whether users are comfortable “living” in Facebook’s world—and whether a simple rebrand is enough to shake these fears.