Shenzhou-13 spaceship will be launched at 12:23 am Saturday Beijing Time 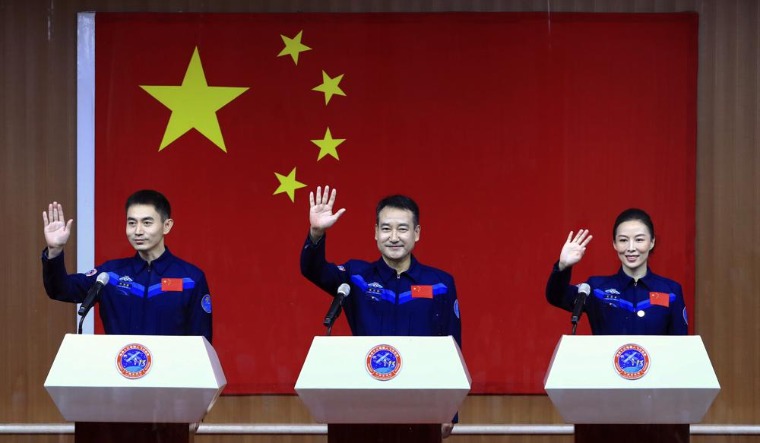 China's Shenzhou-13 spaceship is expected to be launched into space on a Long March-2F rocket early Saturday morning from the Jiuquan Satellite Launch Center on the edge of the Gobi Desert.

The spacecraft will carry three People's Liberation Army Astronaut Corps (PLAAC) taikonauts on the second flight to the Tianhe core module, the first module of the Tiangong space station.

The lauch time has been set at the time of China's orbiting Tianhe space station module passes over the launch site at Jiuquan. This will help the spacecraft to catch up and dock with Tianhe around eight hours later.

The flight will be China’s longest crewed space mission and set a record for the most time spent in space by Chinese astronauts. This will be the second of four crewed missions to the station, which will completed in 2022.

Russian cosmonaut Valery Polyakov, who lived on Russia’s old Mir space station in 1994 and 1995, holds the record for the longest stay in space at more than 14 months.

The first Chinese crew who served a 90-day mission aboard the main Tianhe core module of the space station returned in mid-September. Now the new batch of three astronauts is in the final stage of their preparation to live on its space station for six months.

The new crew has two veterans of space travel. Pilot Zhai Zhigang, 55, who performed China’s first spacewalk is the commander of the mission. Wang Yaping, 41, and the only woman on the mission carried out experiments and led a science class in real-time while traveling on the Shenzhou-10 mission in 2013. Ye Guangfu, 41, will be traveling into space for the first time.

The three later spoke to reporters through a glass barrier at the Jiuquan base, with Zhai saying the length of the mission would be a challenge, but one he was confident they were prepared to meet.

“After almost two years of training (together), our crew members now know each other well and have a tacit understanding. I believe that with the power and wisdom of our team, (we) will definitely resolve all difficulties,” Zhai said.

The mission is expected to continue the work of the initial crew, who conducted two spacewalks, deployed a 10-meter (33-foot) mechanical arm, and held a video call with Chinese leader Xi Jinping.

China Manned Space Agency Deputy Director Lin Xiqiang said the rocket was fueled and ready to fly. “All systems conducting the Shenzhou-13 mission have undergone a comprehensive rehearsal. The flight crew is in good condition and our pre-launch preparations are in order,” Lin said at a Thursday briefing.

It will be physically and psychologically challenging to work and live in a zero-gravity environment for six months. Lin said that the astronauts will have in-orbit exercises and mental health support to help them stay at their best. The ground team will optimize their menu and provide psychological support based on the monthly assessment of the astronauts' status.

The crew’s scheduled activities include up to three spacewalks to install equipment in preparation for expanding the station, verifying living conditions in the module and conducting experiments in space medicine and other areas, Lin said.

The Shenzhou-13 team has received special training and made full preparation for the installation of important devices for mechanical arms as well as various sci-tech experiments and applications.

China’s military, which runs the space program, has released few details but says it will send multiple crews to the station over the next two years to make it fully functional. Shenzhou-13 will be the fifth mission, including trips without crews to deliver supplies.

When completed with the addition of two more modules — named Mengtian and Wentian — the station will weigh about 66 tons, a fraction of the size of the International Space Station, which launched its first module in 1998 and will weigh around 450 tons when completed. Lin said the two additional modules would be sent before the end of next year during the stay of the yet-to-be-named Shenzhou-14 crew.

China was excluded from the International Space Station largely due to U.S. objections over the Chinese program’s secretive nature and close military ties. It made plans to build its own space stations in the early 1990s and had two experimental modules before starting on the permanent station.

US law requires congressional approval for the contact between the American and Chinese space programs, but China is cooperating with space experts from countries including France, Sweden, Russia, and Italy.

Lin said China was expanding such cooperation, with Ye Guangfu having undergone training with the European Space Agency in 2016, and European astronauts participating in China’s sea survival training in 2017.

“We welcome astronauts from other countries entering our space station and conducting international cooperation,” Lin said. “We believe that after the station enters the operation and utilization phase, more foreign astronauts will visit our station.”

Commenting on his time with the ESA, Ye called it an unforgettable experience that “made me realize that the exploration of the vast space and the construction of a home in space are a shared mission and pursuit for astronauts.”

“I look forward to the day when international colleagues can travel in space together (with us), and I welcome them to visit China’s space station,” Ye said.

China has launched seven crewed missions with a total of 14 astronauts aboard since 2003, when it became only the third country after the former Soviet Union and the United States to put a person in space on its own. Two Chinese astronauts have flown twice.

Tianhe (meaning: Harmony of the Heavens) was launched into orbit on 29 April 2021 as part of the China Manned Space Program. The core module provides life support and living quarters for three crew members and provides guidance, navigation, and orientation control for the station. The module also provides the station's power, propulsion, and life support systems.

The module consists of three sections: the habitable living quarter, the non-habitable service section, and a docking hub. Overall, the living quarters have a volume of 50 cubic meters of habitable space for three people, compared to only 15 m3 for Tiangong-1.

The station has a bigger robotic arm, so it can move subsequent modules to different ports of the core module.

Currently, the two cargo crafts, namely Tianzhou-2 and Tianzhou-3, are docked at the two ends of the Tianhe core module to form a linear shape, waiting for the arrival of Shenzhou-13 crew members.