As of August 1, China has won the most gold medals, 24, at Tokyo Olympics 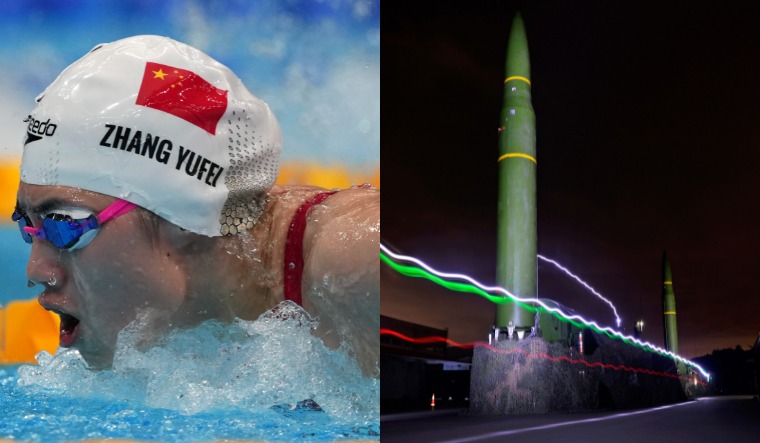 That China would be one of the 'superpowers' of the Tokyo Olympics was no surprise. As of Monday, China ranked number 2 in total number of medals won (52), but the Communist nation has won the most gold medals, 24.

What was less obvious was the fact that 'spin-offs' from China's pursuit of becoming a military and scientific superpower are helping fulfil its Olympic ambitions. In recent years, US and international analysts have warned that China was aggressively pursuing 'Military-Civil Fusion' with the goal of becoming a' world class military' by 2049.

Key technologies being targeted under MCF include quantum computing, big data, semiconductors, 5G, advanced nuclear technology, aerospace technology and AI. And it is not just China's military that is benefiting from MCF.

The Chinese swimming team won three gold medals, two silver medals and one bronze medal. Among the systems used by CASC was an inertial navigation system, a navigation system that uses instruments such as an accelerometer, gyroscope and magnetometer to calculate an object's altitude and position and guide it to a target.

The South China Morning Post reported CASC scientists made a miniature version of the INS used by intercontinental ballistic missiles to "help swimmers refine their technique and cut down on drag". CASC space scientists miniaturised the system to weigh just a few grams, so that swimmers could wear it comfortably. The swimmers were then made to sit in a wind tunnel where they simulated swimming against the wind.

The South China Morning Post reported, "The simulation allowed the scientists to calculate the precise drag produced by different movements, CASC said. The assessments were then developed into recommendations on ways the swimmers could refine their technique and manage their body shape."

A wind tunnel was also used to train the Olympic rowing team. Global Times reported a CASC laboratory, "which is equipped with low-speed wind tunnels, successfully developed a three-dimensional force-measuring platform that can measure the aerodynamic drag of athletes during the rowing projects with different gestures and combination of players". The Chinese rowing team won a gold medal in the women's quadruple sculls and broke the world record in the event. China also won the bronze medal in the men's double sculls, which was the country's first medal in men's rowing.

China has increased investment in sports science infrastructure. "A new wind tunnel dedicated entirely to sport was completed in Beijing last year to help improve performance in international competitions, including the next Winter Olympic Games to be held in China,” the South China Morning Post reported.