In Brazil, an electric flying car by Embraer hints at the future of air-taxi transport

India, Brazil, Australia, Japan, and France could be the first to benefit 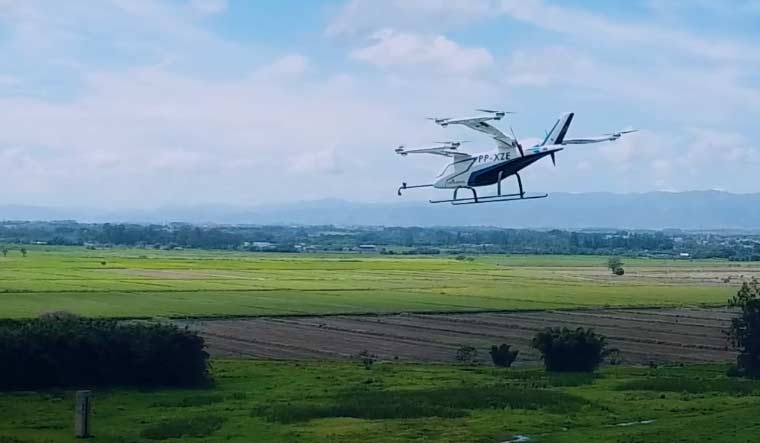 A prototype of the Embraer Eve in flight | Eveairmobility

The dreams of the future were flying over the skies of Sao Paulo state in Brazil this March as Brazilian aerospace giant Embraer—a company that claims that about every 10 seconds one of its aircraft takes off somewhere in the world—showed off its working prototype of the air taxi of the future, a vertical take-off drone-like passenger flying car you can call to you with an Uber-like app.

Uber set up the specs for what the world saw take to the skies of Brazil just last month: An all-electric vehicle with cruising speed of 150–200 miles per hour, a cruising altitude of 1,000–2,000 feet, and able to make trips of up to 60 miles on a single charge.

The working prototype took to air at Embraer’s headquarters in Gavião Peixoto, São Paulo, last week. The vertical take-off and landing (eVTOL) vehicle looks like an oversized drone, with 10 propellers—8 horizontal and 2 vertical—and is designed to transport passengers in what will eventually be a totally autonomous flight, said the company. Though the prototype was smaller and remote-controlled, it provided a visual of where we are headed and what the future looks like.
The vehicle’s vertical take-off also means vertical travel, which means the futuristic vehicles will move along vertical towers, reaching skyports near the functional living and working spaces that give the footprint of the building its population density.

The long road to prepare it for market includes obtaining eVTOL certification and approval of the urban air traffic management being developed—navigable corridors, the technology to separate aircraft to prevent collisions while organizing and expediting the flow of traffic with data flowing to the automated vehicles.

Our existing methods of transports have reached their limits and humanity needs to find ways to get people to their destination exactly when they need to be there, travelling faster, at a lower cost, and at greater fuel efficiency with less environmental impact, that was the premise that began the long road to this day in personal aerial transport technology.

The project as a whole is part of Eve Urban Air Mobility Solutions, EmbraerX’s first spin-off, which aims to develop and shape the urban mobility ecosystem. EmbraerX has been part of the Uber Elevate Network since its inception in 2016.

Since 2018 Uber has had an exclusive Space Agreement with NASA to focus on traffic management technologies and the impacts of urban air mobility. It selected India, Brazil, Australia, Japan, and France as the first countries to receive tests of the new aerial shared transport system it is developing.

Transportation models will be completely transformed in these countries, predicted Uber Elevate head Eric Allison then, touting the expected vertical takeoff and landing features of the vehicle just unveiled in Brazil.

“We see enormous potential in the use of drones, creating a truly multimodal transportation future,” he predicted. Skyports are also being developed for Uber Air in partnership with property companies.

The city of Rio de Janeiro and the State of São Paulo, where Embraer’s main global operational headquarters is located, are two of Uber’s largest hubs in the world and also, coincidentally, places with large helicopter fleets that provide validation for the air travel concept, and the need for its services.

Are these flying cars a realistic solution?

The unveiling in Brazil is a clear sign that thoughts of flying cars are no longer the stuff of dreams. There is a palpable reality in the works, though the functional prototype is still a remote-controlled, small-scale version with no capacity to carry passengers. But that is the next step, a completely autonomous air taxi.

For those with imagination and vision, the answer to the question was clear. Tomorrow’s skies will look like the air above a flower garden with pollinating bees buzzing from place to place—our living spaces populated with taxi-size drones manoeuvring around obstacles and each other to pluck people and drop others off, getting to places as-the-crow-flies, shaving distance, fuel, and time, and making life 3D-efficient. To get to tomorrow, the things of today, however, will undergo profound change.

Engineers at Embraer and Uber have been dreaming up ways of using the technologies that power their business today to create a changed future. Think about how different our cities will be if we remove a good portion of vehicles off the streets. Megacities, big cities, and small cities with only a per cent of the cars we have today, with a fleet of air cars that can get to people within a few minutes. People with door-to-door aerial-sharing mobility, zipping through the skies controlled by the new development of solutions for urban air traffic management and an on-demand urban air transportation system to address the extreme rapid urbanization of the planet while fighting the trauma and constant anxiety of vehicular and mass transit.

For those dreaming of the future, daunting challenges are on the way. But there are also new technologies and systems being developed to solve them, exploring horizons that are new to most of us, but that will shape the way we live in the future. The development of the infrastructure that will allow the safe operation of such as system is as important as is the development of the flying vehicle.

The vehicle itself reaches new heights of technology, quality, and reliability at a reasonable cost so it can benefit the greatest number of people, that was the goal and it is closer than we imagined. The prototype looks like something of a sci-fi movie. Embraer and Uber are envisioning passengers requesting it by phone, boarding at a nearby port, and traveling in a fully automated vehicle to their destination.

In India, with Mumbai, New Delhi, and Bangalore as some of the most congested cities in the world, the new aerial transport paradigm will offer a transportation option that can help alleviate routes that are among the most constantly congested in the world.

Humanity has dreamed of conquering the air above us since we started looking at the sky. We have seen airplanes, helicopters, drones that can cruise the skies, but these new steps are the latest on the long road to making the skies an area of practical everyday use of humans on a mass scale, turning buildings and living and working areas into airports, and turning human transport into the air as easy and accessible as cars made it on the ground.

The unveiling in Brazil showed that science and technology and revolutionary business models are transforming our lives with dizzying speed, preparing the skies for personal flight. Their new horizons are our future.