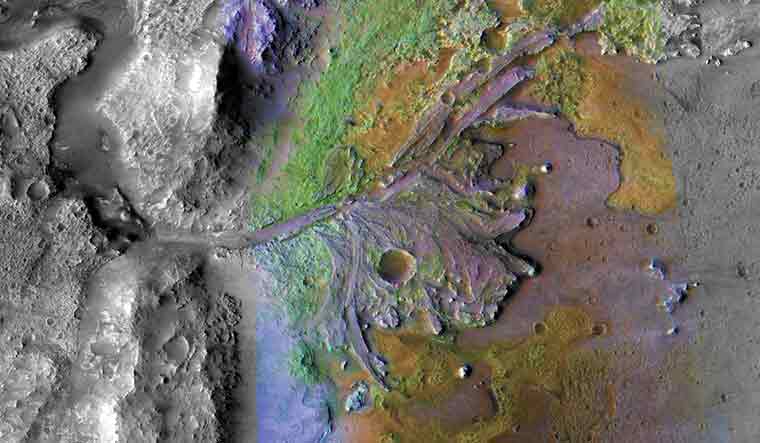 In a historic development, NASA's rover Perseverance landed on Mars, massively aiding the search for traces of life on the planet. Perseverance, the biggest and the most advanced rover ever sent by NASA, landed in the Jezero Crater, looking for signs of past microbial life in river delta deposits formed over billions of years that might have enhanced preservation of evidence of life.

The delta, speculated to have formed due to sediment deposits at the mouth of Hypanis Valles, a river system on ancient Mars, separates the southern highlands from the northern lowlands. Scientists believe that Mars once had an ancient ocean and a water cycle similar to Earth's and large seas, or an ocean even, existed in the northern lowlands.

Jezero crater was selected for NASA's next rover mission partly because the site contains a river delta, which on Earth are known to effectively preserve organic molecules associated with life. Findings from Jezero crater could aid our understanding of how life evolved on Earth. If life once existed there, it likely didn't evolve beyond the single-cell stage. That is because Jezero crater formed over 3.5 billion years ago, long before organisms on Earth became multicellular. If life once existed at the surface, its evolution was stalled by some unknown event that sterilised the planet. That means the Martian crater could serve as a kind of time capsule preserving signs of life as it might once have existed on Earth.

Other Mars Missions in orbit

It is not just the United States that is enamoured by the Red Planet. The United Arab Emirates' orbiter reached Mars on Tuesday, followed less than 24 hours later by China's orbiter-rover combo. Both the UAE and China are newcomers at Mars, where more than half of Earth's emissaries have failed. China's first Mars mission, a joint effort with Russia in 2011, never made it past Earth's orbit.

Called Amal, or Hope in Arabic, the Gulf nation's spacecraft is seeking an especially high orbit—13,500 by 27,000 miles high (22,000 kilometers by 44,000 kilometers)—all the better to monitor the Martian weather. China's duo—called Tianwen-1, or “Quest for Heavenly Truth”—will remain paired in orbit until May, when the rover separates to descend to the dusty, ruddy surface. If all goes well, it will be only the second country to land successfully on the red planet.

The then USSR was the first to send a mission to Mars. According to the European Space Agency (ESA) database, Marsnik 1 was launched on October 10 1960. A flyby mission, it did not reach the Earth's Orbit. From 1960 - 62, the USSR launched five missions to Mars—Marsnik 1, Marsnik 2, Sputnik 22, Mars 1 and Sputnik 24. It was on November 5, 1964 that the US launched 'Mariner 3'. A flyby mission, the launcher shroud failed to jettison.

It was only on July 3, 1998 that a new entrant launched any mission to explore Mars, when Japan launched the 'Nozomi' mission. It failed to enter orbit and flew by Mars on December 14, 2003 at a distance of 1,000 km. No data was returned.

In 2003, the European space agency and the UK space agency embarked on a mission to Mars. Launched in June 2003, a 'Beagle 2' lander was carried to Mars by 'Mars Express orbiter'.

The orbiter and lander arrived on December 25, 2003. Beagle 2 was successfully released but no further contact was made and the lander was declared lost. In January 2015, the UK Space Agency announced that the lander had been identified in images from NASA's Mars Reconnaissance Orbiter. The images appeared to show the lander partially deployed on the surface. The last decade saw China making rapid strides in the area of space exploration. Joint launch of Russian Phobos lander and sample return mission and Yinghuo-1, a Chinese Mars orbiter took place on November 8, 2011.