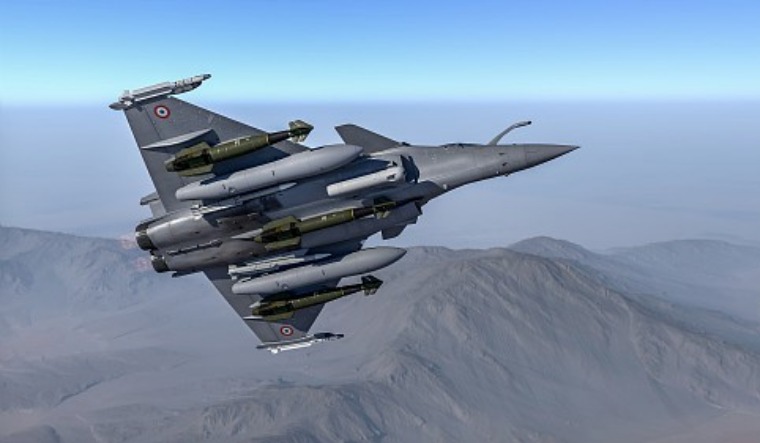 French defence company Safran has announced that it has successfully completed two 'separation' tests of a heavy version of the AASM smart munition from a Rafale fighter. The AASM (Armement Air-Sol Modulaire) is also known as the HAMMER (Highly Agile Modular Munition Extended Range).

A separation test involves the release of a weapon or aircraft component in flight to ensure it clears the launch platform safely. Separation tests are a necessary precursor to start of trials of the weapon itself.

A press release from Safran on Friday announced the tests of the 1,000kg variant of the HAMMER were conducted at the French defence procurement agency’s Cazaux flight test centre in southwest France.

The 1,000kg version of the HAMMER would be the heaviest weapon to be deployed on the Rafale, with exception of the Scalp cruise missile, which weighs around 1,200kg.

Safran stated the first live firing tests of the 1,000kg version of the HAMMER—which would involve validation of the weapon's sensors and range—would be conducted in 2021 before the system is qualified for service entry by 2022.

Like the Israeli-supplied SPICE smart bombs that the Indian Air Force used in the Balakot attack last year, the AASM HAMMER is actually an add-on kit to an existing 'gravity' bomb.

But unlike the SPICE, the AASM HAMMER is unique in the sense that it has features of both a missile and a glide bomb. Safran claims the HAMMER "adds a propulsion kit and a choice of guidance kits to standard bombs”. The fact that it is propelled allows the AASM HAMMER to be used at low altitudes or in hilly terrain, unlike normal bombs that are unpropelled.

The AASM HAMMER is a modular weapon, which can be equipped with a variety of guidance systems such as satellite guidance, infra-red seeker and laser. According to Safran, the AASM HAMMER can be fired at ranges of anywhere between 20km to 70km, enabling the launch aircraft to stay out of range of enemy air defences.

The AASM HAMMER kit can be fitted to bombs of different sizes: 125kg, 250kg, 500kg and 1,000kg. The French military has ordered over 1,500 units of the 250kg version of the HAMMER. In early press releases on the AASM, Safran had described the 1,000kg version of the AASM as a 'bunker buster' weapon because of its capability to penetrate several meters of reinforced concrete.

Safran notes, "The 1,000kg AASM features a guidance kit derived from the 250kg version and a specific range extension kit." Explaining the advantages of the 1,000kg version of the AASM HAMMER, Safran stated, "This new weapon will give the Rafale an enhanced strike capability, with payload configurations of up to three 1,000kg AASMs per aircraft. Its standoff range is also extended, thanks to the integrated propulsion system.”

While the Scalp cruise missile can also penetrate reinforced targets, the 1,000kg HAMMER would achieve the same at a lower cost.

In July, reports emerged that the Indian Air Force would be ordering the HAMMER on an emergency basis. Other export users of the AASM HAMMER are Qatar, Egypt and Morocco. Greece is also expected to buy the weapon when it signs a contract to buy the Rafale.