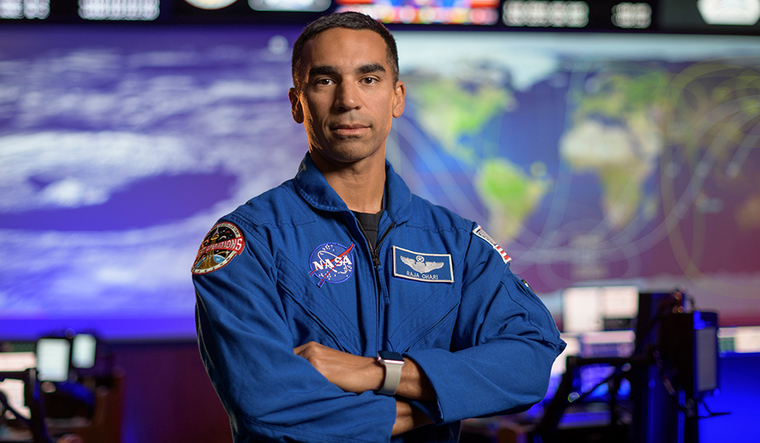 A person of Indian origin, Raja Chari, 43, has been handpicked by NASA as one of the 18 astronauts for its Artemis moon mission. The list was announced by US vice president Mike Pence at NASA's Kennedy Space Centre in Florida on Wednesday.

Artemis, in Greek mythology, is the goddess associated with the moon, and with hunting. She was the twin sister to Apollo, the sun god. For NASA, Artemis is a mission for “humanity's return to the moon”. It will comprise of several missions to put men and women on the lunar surface, the first human presence there after the 1970s. The plan is to put the first woman and next man on the moon by 2024, and over the next decade, to build a sustainable human presence there. The moon mission is a step towards the greater ambition of sending humans to the Mars and other destinations in the future.

Col Chari was a test pilot in the US Air Force when he was selected by NASA to join the 2017 Astronaut Candidate Class. Born in Milwaukee, Chari traces his roots to Hyderabad. His father, Srinivas Chari, an engineering graduate from Osmania University, moved to the US in the 1950s and ended up settling there.

Chari is the third Indian origin astronaut in NASA, and incidentally, the first male. The other two were women—Kalpana Chawla and Sunita Williams. Williams is now part of NASA-Boeing's commercial crew program and is expected to fly the first Starliner mission flight next summer. Chawla died, along with the six other crew members, in 2003 when the space shuttle Columbia disintegrated over Texas on its re-entry into the earth's atmosphere.

Chari has a masters degree in aeronautics and astronautics from Massachusetts Institute of Technology, and had moved on in his military career to become a test pilot. He has accumulated more than 2,000 hours of flight time in the F-35, F-15, F-16, and F-18 including F-15E combat missions in Operation Iraqi Freedom and deployments in support of the Korean peninsula

The astronauts of the Artemis Team will help NASA prepare for the coming Artemis missions, which begin next year working with the agency’s commercial partners as they develop human landing systems; assisting in the development of training; defining hardware requirements; and consulting on technical development. They also will engage the public and industry on the Artemis program and NASA’s exploration plans.

“There is so much exciting work ahead of us as we return to the moon, and it will take the entire astronaut corps to make that happen,” Chief Astronaut Pat Forrester said. “Walking on the lunar surface would be a dream come true for any one of us, and any part we can play in making that happen is an honour. I am proud of this particular group of men and women and know that any of them would do an outstanding job representing NASA and the United States on a future Artemis mission.”

US president Donald Trump released the US Space Policy also on Wednesday which “reaffirms the country's commitment to move explorations beyond low earth orbit and return  to the moon for long term exploration, followed by human missions to Mars and other destinations.''

There is a renewed boost to space explorations now, with humans looking at setting up habitations beyond earth.