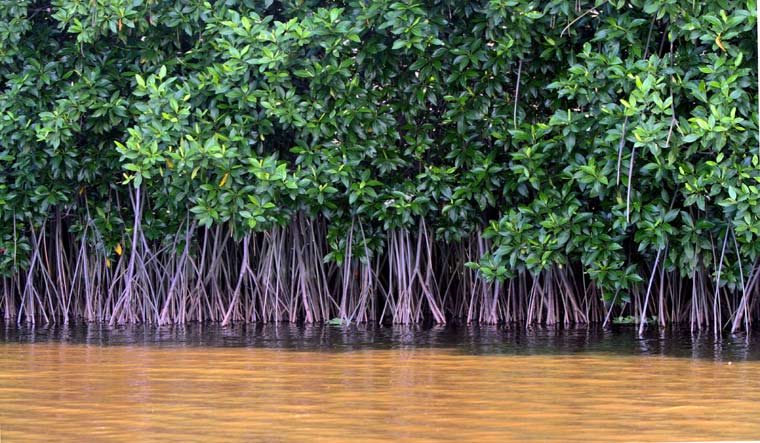 Mangrove forests are facing a 'triple threat' to their long-term durability and survival, according to a new study.

Mangrove forests, having a large biodiversity, are among the world's most valuable ecosystems that provide coastal protection.

The research, conducted by an international team of experts including Dr Barend van Maanen from the University of Exeter, identifies not only how these coastal forests get pushed against their shores, but also what causes the loss of their diversity.

It shows the negative effects of river dams that decrease the supply of mud that could otherwise raise mangrove soils, while buildings and seawalls largely occupy the space that mangroves require for survival.

Mangroves withstand flooding by tides and capture mud to raise their soils. But as the mangrove trees cannot survive if they are under water for too long, the combination of sea-level rise and decreasing mud supply from rivers poses a serious threat.

New computer simulations show how coastal forests retreat landward under sea-level rise, especially in coastal areas where mud in the water is declining. The simulations include interactions among tides, mud transport and, for the first time, multiple mangrove species.

"Both mangrove coverage loss and diversity loss go hand in hand when that landward retreat is limited by expanding cities, agriculture or flood protection works," said Dr van Maanen, senior lecturer at the University of Exeter and supervisor of the project.

"This makes the more landward-located trees flood for longer periods of time, an effect that is intensified by sea-level rise,” said Danghan Xie, lead author of the study.

A narrow mangrove zone is much less effective in protecting the coast against storms, or in the worst case loses its protective properties altogether.

"The loss of mangrove species will have dramatic ecological and economic implications, but fortunately there are ways to help safeguarding these ecosystems,” said co-author Dr Christian Schwarz, environmental scientist at the University of Delaware.

"It is essential to secure or restore mud delivery to coasts to counter negative effects of sea-level rise.

"For coasts where mud supply remains limited, removal of barriers that obstruct inland migration is of utmost importance to avoid loss of mangrove forests and biodiversity," Schwarz said.