The breakthrough could lead to wider use of renewable energy 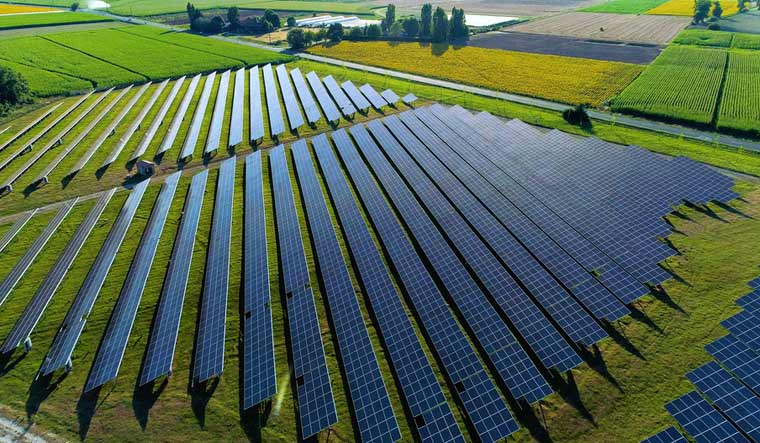 Designing solar panels in checkerboard lines increases their ability to absorb light by 125 per cent, a new study says.

Researchers say the breakthrough could lead to the production of thinner, lighter and more flexible solar panels that could be used to power more homes and be used in a wider range of products.

The study investigated how different surface designs impacted the absorption of sunlight in solar cells, which when put together form solar panels.

Scientists found that the checkerboard design improved diffraction, which enhanced the probability of light being absorbed that is then used to create electricity.

The renewable energy sector is constantly looking for new ways to boost the light absorption of solar cells in lightweight materials that can be used in products ranging from roof tiles to boat sails to camping equipment.

Renewable energy—including solar power—made up 47 per cent of the UK's electricity generation in the first three months of 2020.

Dr Christian Schuster from the Department of Physics said, "We found a simple trick for boosting the absorption of slim solar cells. Our investigations show that our idea actually rivals the absorption enhancement of more sophisticated designs, while also absorbing more light deep in the plane and less light near the surface structure itself. Our design rule meets all relevant aspects of light trapping for solar cells, clearing the way for simple, practical, and yet outstanding diffractive structures, with a potential impact beyond photonic applications.”

The study suggests the design principle could impact not only the solar cell or LED sector but also applications such as acoustic noise shields, wind break panels, anti-skid surfaces, biosensing applications and atomic cooling.

Dr Schuster added, "In principle, we would deploy ten times more solar power with the same amount of absorber material: Ten times thinner solar cells could enable a rapid expansion of photovoltaics, increase solar electricity production and greatly reduce our carbon footprint. In fact, as refining the silicon raw material is such an energy-intensive process, ten times thinner silicon cells would not only reduce the need for refineries but also cost less, hence empowering our transition to a greener economy."