Explained: From IPL teams to hospitals, how UV light is catching on as a coronavirus killer

It has a lot of advantages and risks

On April 14, at the height of the coronavirus pandemic, US President Donald Trump caused a stir by questioning whether people infected could be “injected with disinfectants” and “exposed to Ultraviolet light” as cures. His comments came on the back of declarations by White House scientists that warmer summer days could help slow down the spread of the virus, and that UV rays had a potent impact on the pathogen. The WHO later issued a warning against using UV light on the human body as it would cause skin irritation.

From the efficacy of anti-malarial drug hydroxychloroquine to the ongoing vaccine race, almost every development related to SARS-CoV-2 has come under the dark clouds of controversy. This is because there are still a lot of unknowns about the pathogen, which hinder our full understanding of how the virus operates.

So, are UV rays effective in disinfecting surfaces of the virus? The question assumes importance as the world is now emerging out of sustained lockdowns, with offices, gyms, hotels and restaurants all climbing the ladder to full occupancy. Add to that, the WHO has also raised the spectre of air-borne transmission of the coronavirus, which raises the stakes when it comes to indoor transmission. At a time like this, when compared to chemical disinfectants, UV technologies offer a lot of advantages; however, they also pose certain risks.

What are the UV rays that we are talking about?

UV radiation is broadly classified, based on their wavelength, into three types: Ultraviolet A (UVA) from 315- 399nm, Ultraviolet B (UVB) from 280-314nm, and Ultraviolet C (UVC) from 100-279nm. The only radiation that reach the earth is UVA, since all UVC and most UVB radiations are absorbed by the Ozone layer. “UVA and UVB radiation can both affect health. Even though UVA radiation is weaker than UVB, it penetrates deeper into the skin and is more constant throughout the year,” according to US government’s Centre for Disease Control (CDC).

It is the UVC spectrum that is used for disinfection purposes. More specifically, UVC radiations in the wavelength of around 250nm display germicidal effects. It deactivates bacteria, viruses and other germs by destroying nucleic acids, disrupting their DNA and leaving them unable to perform vital cellular functions.

The drawback? Sustained exposure at such wavelengths has been reported to cause tissue damage in humans. There are other milder wavelengths like Far-UVC (around 220nm) which are widely considered safe for humans; however, there are not enough scientific studies corroborating its germicidal effects, or even the nature of its interaction with the human body.

Do these UV rays actually work against the coronavirus?

There are a lot of scientific studies which claim they do. In June, a study by scientists and physicians at the Columbia University Irving Medical Centre found that more than 99.9 per cent of seasonal coronaviruses present in airborne droplets were killed when exposed to a particular wavelength of ultraviolet light. “Based on our results, continuous airborne disinfection with far-UVC light at the current regulatory limit could greatly reduce the level of airborne virus in indoor environments occupied by people,” said the study’s lead author David Brenner.

The same month, a study published in the journal ACS Nano, by researchers from the Institute of Photonic Sciences in Spain, claimed that using UV light may be an efficient, easily deployable, and economically affordable method to reduce COVID-19 transmission in indoor spaces. It noted that by irradiating this type of light inside the ventilation systems of buildings and in shared indoor spaces while not in use, it is possible to quickly and efficiently deactivate airborne and surface-deposited SARS-CoV-2 viruses that cause COVID-19.

Latest, on June 26, a non peer-reviewed paper in the Medrxiv claimed that thousands of respirators, inoculated with SARS-CoV-2, were successfully disinfected with UVC rays.

How is it used in India?

From the Indian Premier League (IPL) teams to hospitals, there are numerous takers for the emerging UV technology. Though “emerging” might not be an accurate term. As Rohan Oberoi, founder and CEO of Momentum India, explains: “The UVC germicidal irradiation technology is actually decades old, and many organisations in the United States were at the forefront of using it.” Momentum India has now come out with UV Safe, a UVC disinfection device created in partnership with scientists at IIT Ropar. “We had started research on the product before March. The principle is that at a certain dosage, and irradiated for a certain time, the DNA of the pathogen is inactivated and its viral load is rendered useless. Thus, the virus will not be able to attach to the host. The scientists from IIT Ropar worked tirelessly to identify the optimal dosage and the time required,” he said. The device claims, based on scientific tests, that it successfully clears 99.9 per cent of the viruses.

The problem comes when there is anything in the path blocking the UVC rays, which are very weak in nature. “Ours is a zero-shadow device, which means 100 per cent of the light falls on the surfaces. It also has an angular design, with two angles—135 degrees from the floor and 120 degrees between each wing—which ensure that there is a 360 degree spherical formation both horizontally and vertically.” According to Oberoi, the company is in talks with one Indian Premier League (IPL) team who is looking to use the technology to disinfect dressing rooms, hotel rooms and kit bags in their upcoming season. 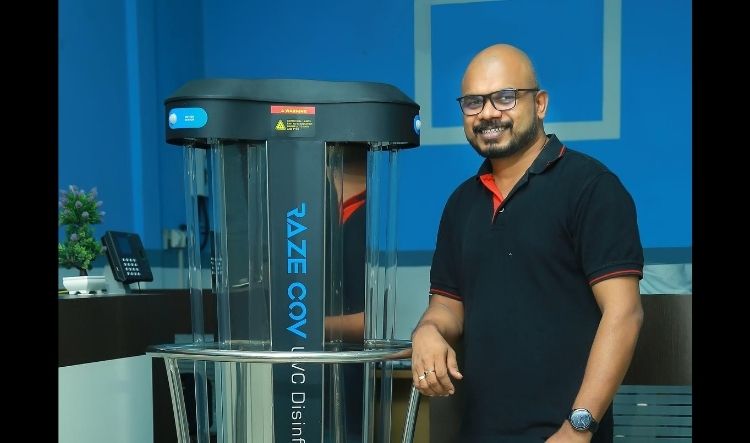 Kochi-based Ibis Medical Equipment and Systems Pvt Ltd is another player that has come out with an advanced UVC device, dubbed RazeCoV Disinfection System. The device is controlled using an in-house developed Android app, that can store information like disinfection cycle, time needed and alarm data. Its features enable an operator to adjust the device height (up to 8ft) to ensure maximum light exposure, covering from floor to ceiling and all corners, including shadow areas. For an average sized room (200 sq ft), the disinfection time is just five to 15 minutes, according to the company.

“There is a lot of interest in our device from different hospitals and medical institutions,” Sujith S., Managing Director and CEO, told THE WEEK. “However, almost 60 per cent of our production are currently being exported. There is a domestic knowledge gap. Also, the initial investment could be considered high (although there are no recurring costs for years) and this might be putting off people. Our clients are mainly hospitals,” he said. Based on whether the device is semi-robotic of fully robotic, the cost varies from Rs 3 lakh to 12 lakh.

How is safety ensured?

Both these systems are to be operated when the room is vacant. Said Oberoi: “UVCs are weak rays, not like X-Rays which can pass through walls and such. Unless someone sits underneath the light with exposed skin for a prolonged period of time, there is no danger. Our system also has added safety precautions. For instance, there is a motion sensor which turns the system off when somebody comes within 3 metres of it, and there are delay timers when getting switched on, and remote operation capabilities.”

Wouldn’t Far-UVC be considered a safer option? Said Sujith: “Even with Far-UVC, there are many ambiguities. Even if we use Far-UVC, there are occupational guidelines and restrictions. People still cannot enter the room when it is operated.”