Karnataka researchers find that elephants, like humans, have innate preferences 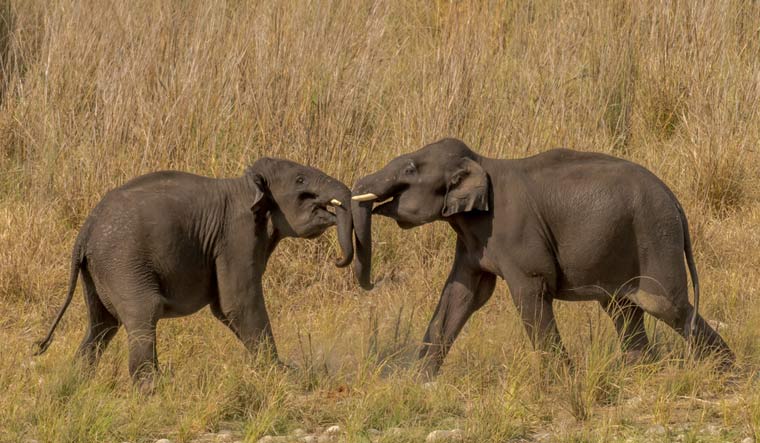 The trunk is to an elephant what hands are to humans. Scientists studying elephant behaviour in Karnataka have come up with an interesting observation —elephant calves pick up their right or left-sided preference for trunk usage so early in life that this trait could be innate in them. This is analogous to humans showing distinct dextral or sinistral behaviour soon after birth.

Researchers from the Jawaharlal Nehru Centre for Advanced Scientific Research observed 30 “unique” calves from 11 distinct clans in Kabini Project in Nagarhole and the Bandipur National Park between December 2015 and December 2017, to study the development of their trunk motor control (the laterality of side preference/handedness in trunk usage) as well as various social and non-social behaviours.

Elephants are social animals which live in clans or female social groups, led by a matriarch. The researchers found that while newborn calves took around six months to achieve the fine motor control of the trunk to pluck grass with the finesse of an adult, they began showing a preference to twisting their trunks in one particular direction even before they turned thee months of age. The team concludes that this observation suggests that the “handedness” or preference for a particular direction in trunk usage may be innate in Asian Elephants. The study was published recently in the International Journal of Developmental Biology.

Asian elephant calves are an interesting research subject for studying the behaviour of development. They are precocious at birth, which means that they are born with a well-developed sensory system and are capable of locomotion hours after birth. However, they are dependent on their mothers for nutrition (they feed on the mother's milk), physical protection and social support for a prolonged period, allowing them ample time and opportunity to learn and perfect the skills necessary for independent survival.

Interestingly, the calves can walk soon after birth, but are incapable of using their trunk to pick up objects and pull grass at birth. This skill develops over time, just as human babies learn to use their hands as they grow older. Human infants, however, are not precocious, they are completely dependant on their mothers for months after birth.

Studies in humans show that there is a distinct link between development of advance language skills and the early expression of hand-preference and consistency in handedness. Is there a similar connection between trunk laterality and some other advanced skill in elephants? The researchers are planning to explore any such connection next, said a release by the Ministry of Science and Technology.

The team also identified 81 unique calf behaviours and classified them based on their level of adeptness in expression. They noticed that as calves grow, they spend less time resting and more time feeding. The researchers noted that behaviours that were linked to resting and grooming, as well as many social and explorational skills, were observed at a very early age. However, skills that required them to use their trunks, such as feeding, developed gradually, and it was only by the age of six to nine months that calves had good motor control skills over their trunks.

The team also looked at mother-calf synchrony in behaviours. Since adults spend most of their waking hours in feeding, but calves do not spend so much time feeding, the mother and her calf had low behavioural synchrony in the initial months. As the calves began feeding more, and developed better trunk co ordination, their behaviour was also better synchronised with those of their mothers. Behavioural synchrony is an important social skill, necessary to maintain cohesiveness between individuals as well as within a group. The researchers noted that mothers and calves made an active effort to synchronise their behaviours, the release added.