Why the global community needs to adopt a collaborative approach 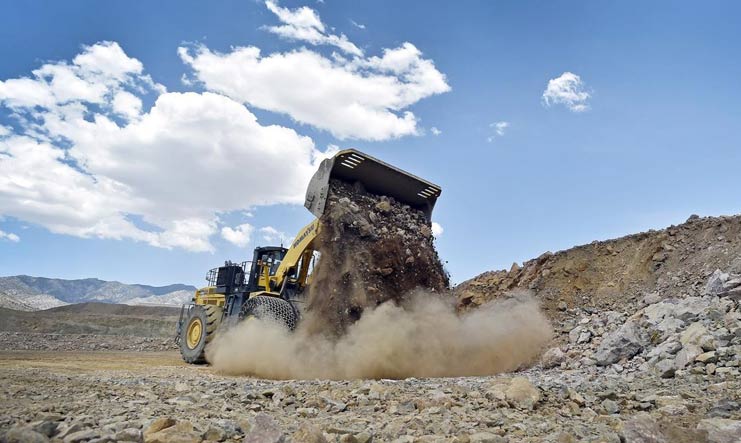 We are in the midst of a changing world order. While changes in the world order were brought about through major wars or revolutionary changes in the political structures in the past, this time around, not a single bullet has been fired nor has any government or political system toppled. But the war for global supremacy is raging on multiple fronts. The intense jostling for economic and geo-political supremacy, tussles like the Huawei 5G race for global big data domination, efforts to depose US Dollar as the international currency of choice, crude oil price games, Wuhan virus narratives, are all battles being fought on different fronts, as part of the larger war for a changed world order. While these battles are being waged out in the open, there is another battle brewing, albeit, below the radar, a smaller battle at the moment but with the potential for immense economic and strategic impact in the future. It is “The Battle for Rare Earths”.

Rare earth elements (REE) are Scandium, Yttrium and 15 other elements of the Lanthanide group of metals. Although they are called ‘rare earths’, except Promethium which is unstable, the others are relatively abundant in the earth’s crust. Even the least abundant rare earth element, Thulium, is about 100 to 200 times more common than gold. What makes them ‘rare earths’ is the fact that they are found highly scattered and sprinkled across the planet in low concentrates and are rarely found in adequate quantities which can be mined and separated economically. Rare earth extraction is one of the most environmentally destructive and toxic producing of all mining practices.

Estimates of Global reserves of rare earths vary widely. Reckonable REE reserves have been identified in China (55 per cent), US (10 to 15 per cent), India and Australia (3 per cent each).

Till 1980s, Mountain Pass in California was the main global source of REE. In 1974, it accounted for 19,900 tons, 78 per cent of global production. Production plunged to a third of global output by 1992 and further to a mere 5 per cent by 2002. The Mountain Pass mine, operating at its full capacity in 1990s, produced every minute 850 gallons of salty waste containing traces of radioactive material. Occasional spilling of this waste into the desert was also reported. California State ordered cleaning up the waste. In 2002, the already struggling ‘Molycorp’ ran out of space to store Mountain Pass waste and as a result, the mine was closed down.

National Institute of Advanced Studies in Bangalore in a 2013 publication recounts Chinese efforts to gobble up the entire spectrum of global rare earths supply chain. In 2005 a Chinese consortium attempted to acquire UNOCAL, an arm of ‘Molycorp’. In 2007, China announced a rationing policy for REE which favoured domestic Chinese producers and promptly cut REE supplies to WR Grace, the large US producer of catalysts. The message was loud and clear. If you want access to RE material, shift your shop to China and get preferential treatment. WR Grace promptly did that and moved base to China. China also made an attempt to buy stakes in the Australian Lynas and Arafura Resources.  Jeffery A. Green’s testimony before a U.S.- China Economic and Security Review Commission Hearing in 2012 clearly brings out the Chinese strategy of killing its REE competitors by starving them of raw materials and simultaneously flooding the markets with Chinese REE products priced unsustainably low, aided by unfair state subsidy. 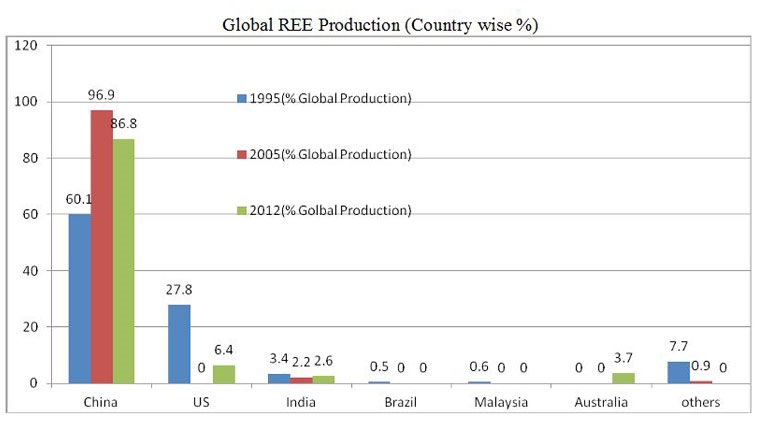 As part of its efforts to acquire niche ‘RE permanent magnet’ technology by any means, in 1990’s, China acquired Magnequench, a General Motors subsidiary, which was making permanent magnets in the US and immediately on expiry of the restrictive conditions stipulated in the contract in 2002, all assets of Magnequench were moved to China by its new owners.

Deng Xiaoping, in a speech in January 1992, had said, “There is oil in the Middle East, rare earths in China” and “we need to properly manage our rare earth resources and make the most of our country’s development”. True to his words, China today controls not only the supply of raw materials but also production of the key intermediaries that go into a vast array of hi-tech growth industries that use REE. The aggregate market capitalization of the top ten US and western Companies put together, account for just about a fifth of the size of just one Chinese firm, the Baotou Steel Rare Earth High Tech Company. Today’s global rare earth eco system’s design enables China to exploit any new breakthroughs, anywhere.

China demonstrated her brute disdain for diplomacy and trade regulations by cutting off REE Supplies to Japan following the ‘fishing trawler’ collision in September 2010. Raghav Bahl, in his book Super Economics describes the Chinese arm twisting and price manipulations during 1992 to 1996 to throw the Americans out of ‘rare earths’ race by driving down market prices and having established monopoly, sending the prices soaring high by steadily slashing their REE export from 62,000 tons in 2006 to half that amount by 2010.

Coming to India, the production is about 2 per cent of global RE oxides and we remain a low cost ‘material provider’. India needs to focus on the strategic exploitation of its rare earths resources by valorizing it by creating an eco system for downstream products instead of just selling the oxides. Many argue that India must also adopt a policy of ‘Technology in Exchange for Resources’ by incentivising foreign companies with rare earth technology to set up joint production facilities in India with Indian partners and gradually transfer technology to the domestic partners, in exchange for cheaper raw materials.

Consequent to the Chinese response to Japan through the ‘rare earth’ route in 2010, the world has started thinking of alternatives. However, so far, there have been only isolated reactions, with no concrete, united response from nations around the world. Although US resumed mining in Mountain Pass in 2018, the ore is shipped to China, where it is separated and processed, before being shipped back to the US. Initiating a shift in strategy, Blue Line, a US processor of REE, has signed an MoU with Lynas, Australia to build a separation facility in US. The Pentagon has also recently initiated a process to fund US domestic rare earth magnetic production.  Exploration has commenced for REE in the ‘Round Top’ mines in US and a provision has been  introduced in the 'US National Defence Authorisation Act', prohibiting purchase of permanent RE magnets made in China. There are also some initial reports of large REE deposits underneath Japanese waters.

The Dragon has shown that it will spit fire at will. What is the way forward for rest of the world? Considering the lead time required to gear up potential alternative sources to go into production, there is no escaping from the Dragon’s clutches even in the midterm. Although turning off the REE tap will have adverse implications for China, too. China’s past track record and recent muscle flexing should sound a loud warning bell. After all, Chinese believe that they were wise in concentrating on economic development while the US was busy sorting out problems around the world from 1990s.This draws an eerie comparison in today’s scenario where the world is busy fighting the ‘Chinese gifted Wuhan virus’, while Chinese themselves are working overtime manufacturing PPE equipment in millions for the world, and gobbling up companies and shares in the distressed markets around the world.

The global community needs to adopt a collaborative approach. Countries which have the upstream ore resources, those with technology for refining the rare earth ores and manufacturing Hi-tech downstream products must come together and evolve a joint model. The successful collaborative models of ‘International Space Station’ and the ‘Large Hadron Collider’ project should provide the incentive. Renewed efforts aimed at exploring new sources of REE worldwide and search for alternative material as substitute for REE must form part of this effort.  Research must also focus on sustainable mining and refining processes as well as on more efficient use of REE and efficient recycling methods.

China, although an economic giant already, is still only a middle income economy and has a long road ahead to become a high income economy. The realistic possibility of China “Growing old before growing rich” also looms large. Therefore, despite its criticality for rest of the world, China is unlikely to use the REE weapon beyond a point and create inadvertent turbulence for itself, in its relentless pursuit of its long term objectives. That may just give the world the window of opportunity to get its act together.

Lt Gen. Krishnan is a former deputy chief of Army. The opinions expressed in this article are those of the author and do not purport to reflect the opinions or views of THE WEEK.