Scientists explain greater stability of temperatures in the tropics

The lightness of water vapour helps to stabilise tropical climate 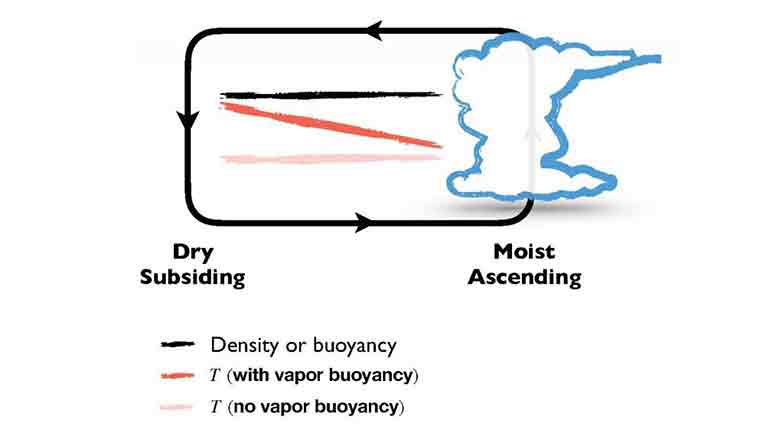 This graphic illustrates vapour buoyancy effect, in which cold, humid air rises because it is lighter than dry air | Da Yang/UC Davis

It has been observed that tropical climate is more stable than extratropical climate. Now scientists are offering a different explanation of the tropics’ climate stability.

A generally accepted understanding is that dry air rises and cold air sinks, and both hot and cold air currents power the weather systems on earth.

But a study from the University of California, Davis, found that in the tropical atmosphere, cold air rises due to an overlooked effect—the lightness of water vapour. This effect helps to stabilise tropical climates and buffer some of the impacts of a warming climate.

The study, published in the journal Science Advances, is among the first to show the profound implications water vapour buoyancy has on earth's climate and energy balance.

"It's well-known that water vapour is an important greenhouse gas that warms the planet," said senior author Da Yang, an assistant professor of atmospheric sciences at UC Davis and a joint faculty scientist with Lawrence Berkeley National Laboratory. "But on the other hand, water vapour has a buoyancy effect which helps release the heat of the atmosphere to space and reduce the degree of warming. Without this lightness of water vapour, the climate warming would be even worse."

Dry air contains mostly of nitrogen and oxygen molecules, which weigh more than water molecules. Humid air is lighter than dry air at the same temperature, pressure, and volume because the molecular weight of water is less than that of dry air. This is called the vapour buoyancy effect. The new study discovered this effect allows cold, humid air to rise, forming clouds and thunderstorms in Earth's tropics. Meanwhile, warm, dry air sinks in clear skies. Earth's atmosphere then emits more energy to space than it otherwise would without vapour buoyancy.

The study found that the lightness of water vapour increases earth's thermal emission by about 1-3 watts per square meter over the tropics. That value compares with the amount of energy captured by doubling carbon dioxide in the atmosphere. The authors' calculations further suggest that the radiative effects of vapour buoyancy increase exponentially with climate warming.

A better understanding of the vapour buoyancy effect and its stabilizing role in the tropics can also improve cloud and thunderstorm simulations, as well as climate models, the study said.

"Now that we understand how the lightness of water regulates tropical climate, we plan to study whether global climate models accurately represent this effect," said the study's lead author, Seth Seidel, a graduate student researcher at UC Davis.