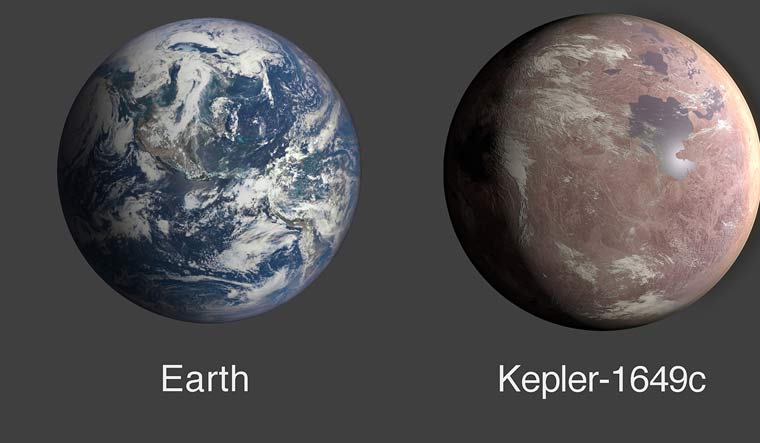 This graphic compares the size of Earth and Kepler-1649c, an exoplanet only 1.06 times larger than Earth by radius. Credit: NASA/Ames Research Center/Daniel Rutter | NASA

Astronomers have found an Earth-size planet in its star’s habitable zone, where conditions may be just right to allow the presence of liquid water on the surface.

A team of transatlantic scientists discovered this exoplanet while they were scanning through old observations data from NASA's Kepler space telescope, which the space agency retired in 2018.

The planet called Kepler-1649c, located 300 light-years from Earth, is most similar to Earth in size and estimated temperature. The planet is only 1.06 times larger than our own planet. The amount of starlight it receives from its host star is 75 percent of the amount of light Earth receives from our Sun. So researchers estimate that the temperature on the planet may be similar to our Earth.

There is still much that is unknown about Kepler-1649c, including its atmosphere, which could affect the planet's temperature. Current calculations of the planet's size have significant margins of error, as do all values in astronomy when studying objects so far away. But based on what is known, Kepler-1649c is especially intriguing for scientists looking for worlds with potentially habitable conditions.

"This intriguing, distant world gives us even greater hope that a second Earth lies among the stars, waiting to be found," said Thomas Zurbuchen, associate administrator of NASA's Science Mission Directorate in Washington.

"The data gathered by missions like Kepler and our Transiting Exoplanet Survey Satellite (TESS) will continue to yield amazing discoveries as the science community refines its abilities to look for promising planets year after year."

Scientists working with the Kepler mission had developed an algorithm called Robovetter to help sort through the massive amounts of data produced by the Kepler spacecraft, managed by NASA's Ames Research Center in California's Silicon Valley. Kepler searched for planets using the transit method, staring at stars, looking for dips in brightness as planets passed in front of their host stars.

With an enormous number of tricky signals, astronomers knew the algorithm would make mistakes and would need to be double-checked. Kepler False Positive Working Group reviews Robovetter's work, going through each false positive to ensure they are truly errors and not exoplanets, ensuring fewer potential discoveries are overlooked. As it turns out, Robovetter had mislabeled Kepler-1649c.