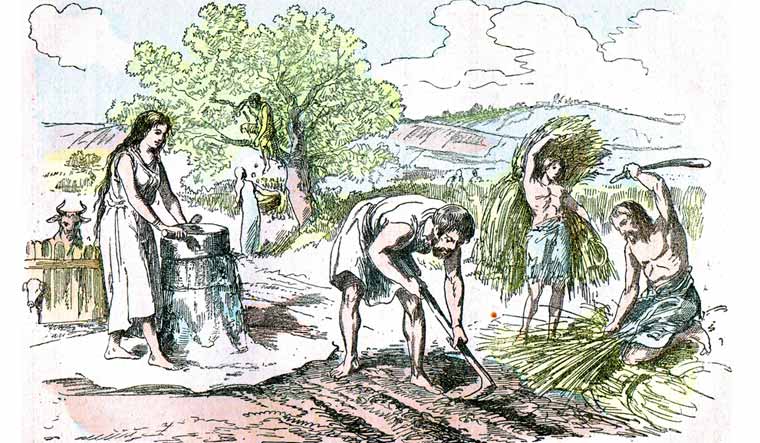 Researchers from IIT Kharagpur have found archaelogical evidence of a 3,000-year-old Iron Age settlement at Karim Shahi and a Historic to Medieval settlement at Vigakot near Thar desert.

While the archaelogical remains found at Karim Shahi region suggest existence of human habitation from Early Iron Age to Early Historic Age (3100-2300), evidence of Historic to Medieval times (1500-900) settlement was unearthed at Vigakot, an IIT Kharagpur statement said on Thursday.

The findings have been published online in the Elsevier journal 'Archaeological Research in Asia'.

Soon after the fall of the 5200-3300-year-old Indus Valley civilization, which is mainly attributed to declining monsoon and major droughts, the Iron Age civilization came into being sometime around 3000-2500 years ago.

During the research over the past three years, the team found evidence of the Iron Age civilization at Karim Shahi area of Thar Desert, a team member said.

The researchers also found traces of climate induced migration from the west to the east.

"Analysis of sediments and oxygen isotopes in fossil shells found in the areas indicated presence of active river system and some rainfall that probably sustained human habitation from the Early Iron Age to medieval times though major Harappan cities were abandoned by that time due to water deprivation," Professor Anindya Sarkar from IIT Kharagpur said.

"It is long known that from Mature to Late Harappan period, the number of human settlements continuously increased from the west - Indus River valley to the Ghaggar-Hakra in the east.

"Our findings suggest that such human migration was far more expansive than ever thought before. We believe that the gradual southward shift.... forced people to migrate for greener pastures," he said.

The researchers also referred to the historical travelogue of Al Beruni of 1030 AD which mentioned about the presence of rivers in Kutch.

The findings also threw light on the articles used by people.

Professor Sarkar said, "At one place in Vigakot, we found a 1100 year old Chinese Qingbai porcelain, probably manufactured in Guangdong province of south China, and Sgraffiato potteries of 10th century Persia suggesting that the place was a trade centre on the long-distance trade route between West Asia and China."

At Motichher, iron objects, nuggets and slags have been found.

A pertinent observation made in this research is that climate refugees took refuge where some rainfall was still available.

"United Nations framework convention on climate change warned about such 'climate refugees' due to impending climate change. If it could have happened in the past it will happen in future too," remarked Prof Sarkar.