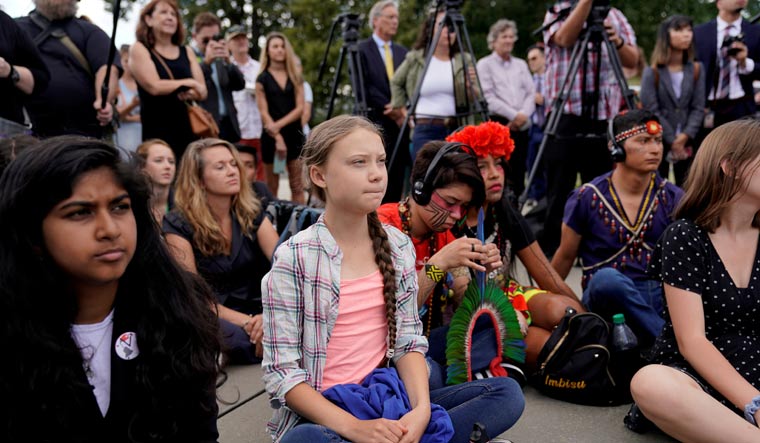 Inspired by the 16-year-old Swedish activist Greta Thunberg, millions of young people from some 150 countries will take off from school or work on Friday to demand urgent measures to stop environmental catastrophe.

In conjunction with the UN summit this week, organizers on Friday will hold coordinated strikes around the world for a third time, with Thunberg spearheading a march and rally in New York, home of the United Nations headquarters.

The aim is for students and others from around the world to speak in one voice about the impending dangers of climate change on the planet.

1.1 million public school students from New York City will march one mile to the Battery Park at the edge of the financial district for a rally that will feature speeches and music in Lower Manhattan.

Thunberg, who was nominated for the Nobel Peace Prize in March, sailed to New York from England aboard a zero-carbon emissions vessel to partake in the UN summit. It brings together world leaders to discuss climate change mitigation strategies, such as transitioning to renewable energy sources from fossil fuels.

Thunberg appeared before several committees of the US Congress on Wednesday to explain the new generation's view on climate change.

Instead, she presented a report from the Intergovernmental Panel on Climate Change 2018, which  called for rapid and unprecedented changes in the way people live. This is necessary to prevent the temperature from rising 1.5C by 2030. "I want you to get behind the science and I want you to take action," she said.

Organizers said the demonstrations would take different forms. The purpose of these measures is to promote awareness, seek political action to mitigate the causes of climate change.

Global warming is expected to change the distribution and types of clouds in the Earth's atmosphere, and clouds can have both warming and cooling effects on the climate.

A study, published in the journal Science Advances, found that the rate of warming increased dramatically as carbon dioxide levels rose, a finding with  far-reaching implications for Earth's future climate. The rate at which the planet warms in response to the ongoing buildup of heat-trapping carbon dioxide gas may increase in the future.

Carbon emissions climbed a record high last year, despite a warning from the UN-backed Intergovernmental Panel on Climate Change in October that output of the gases must be slashed over the next 12 years to stabilize the climate.