Chandrayaan-2: Did crash landing cause communication blackout? What experts think 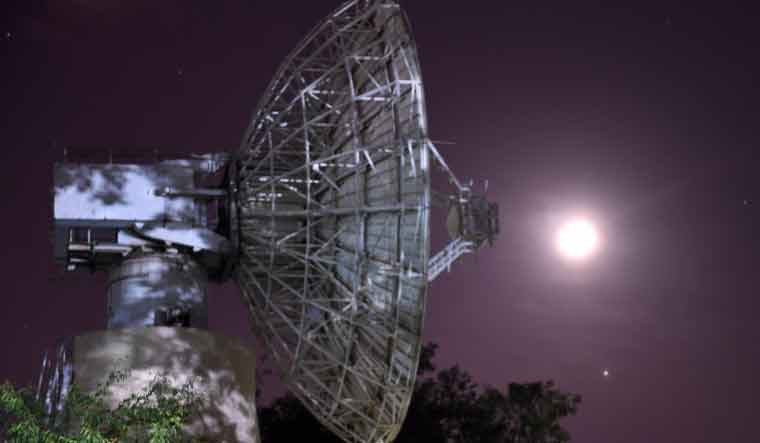 The moon and an antenna at ISRO Telemetry, Tracking and Command Network (ISTRAC), Bengaluru on Friday night when the nation was waiting for Chandrayaan-2's soft landing on the lunar surface | Bhanu Prakash Chandra

Even as scientists at the Indian Space Research Organisation (ISRO) are analysing data from Chandrayaan-2's Vikram Lander, experts are attributing multiple reasons for the lander's loss of contact during its powered descent on the moon's south pole.

According to Narayan Prasad, co-founder and chief operations officer of Satsearch, there can be many reasons for the loss of communication during the last stage. "There could be change in orientation, failure of engines or on-board computer-related issues. I feel, most likely, it is engine-related problems since the communication loss was observed just 2.1 kms above the moon surface during the final descent,” he told THE WEEK.

A few opined that a crash landing might have caused the communication blackout. The lander could have got disconnected as a result of the crash landing. “There is also a possibility that the antenna of the lander broke, despite successfully landing on the moon's surface. As a result, it is unable to communicate back,” remarked an expert.

However, there are a few who differ. They pointed out that the spacecraft's trajectory, moments before it snapped contact, indicated that the lander had a significant deviation from what was planned. “It is also possible that some of the four engines did not work as expected and it may have crashed as the speed was way more than what it should have been as indicated by the spacecraft's trajectory moments before it lost the signal,” observed another expert.

However, a clear picture will emerge only after the ISRO carefully studies the telemetry.

In an earlier interaction, Pawan Kumar Chandana, a space expert and CEO of Skyroot Aerospace, had said that accurately incorporating local gravity variation on the moon in its descent trajectory, landing at the right landscape to avoid a communication blackout and autonomous landing in perfect unison of liquid engine throttling would prove complex manoeuvres for Chandrayaan-2.

Experts had time and again also stated that soft landing is a challenging aspect. Even ISRO chairman K. Sivan had recently stated, "Globally, soft landing attempts on the moon was met with only 37 per cent success rates. It is a new mission for ISRO and there would be more anxiety as it will be a first-of-its-kind for us".

The last-minute loss of contact aside, Chandrayaan-2 has been a 95 per cent successful mission. Earlier in the day, the ISRO had stated that descent was undertaken as planned and a normal performance was observed up to an altitude of 2.1 km. Subsequently, the communication from the Lander to the ground stations was lost.

Data was being analysed to establish the cause. The Orbiter has been in good shape and functioning normally. With a lifespan of one year, the orbiter payloads is expected to conduct remote-sensing observations from a 100-km orbit around the moon.