Qatar joins club of countries that are cooling their roads

The experimental blue coating on roads is expected to reduce temperatures 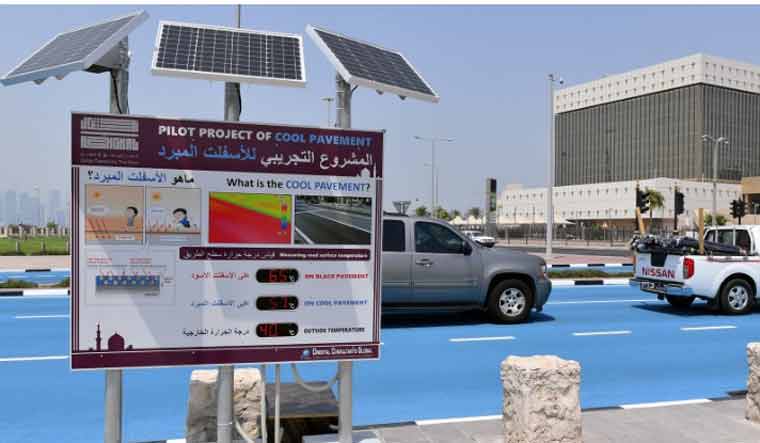 After Los Angeles, Mecca, Tokyo... Doha joins the club of cities trying to cool traditional asphalt roads. The 18-month experiment was launched on August 19. A 1mm-thick coating of a blue, “heat-reflecting pigment with hollow ceramic microspheres” has been applied on a busy road near Souq Waqif, a popular heritage zone. To study the impact of pedestrians and cyclists on the coating, a 200m stretch near Katara cultural village has also been painted.

Sensors will monitor the temperature of the coated surface and compare it with traditional asphalt roads. The experimental coating is expected to reduce temperatures by reflecting up to 50 per cent of solar radiation; uncoated asphalt absorbs this radiation. Ashghal, Qatar's public works authority, is the lead agency of the project.

While Ashghal and its Japanese partner in the project have been tight-lipped about the actual composition of the coating, an official statement said that it comprised four coats of a primary material followed by three coats of a heat-absorbent material. At the end of 18 months, Ashghal will analyse the results and see if it should be rolled out nationwide.

With FIFA 2022 looming on the horizon, the tiny, gas-rich nation is racing to complete infrastructure projects that will make life easier for football fans and players. Qatar Rail, a metro rail project, opened its first line this May. The 40km-long Red Line links the Al-Wakrah and Lusail stadiums; it will eventually connect Hamad International Airport with downtown Doha. ‘Blue Roads’ are expected to reduce temperatures within the city and make things bearable for pedestrians.

In 2017, incumbent Mayor Eric Garcetti of Los Angeles had launched a similar project. The city used a grey coating called CoolSeal, originally used by the US armed forces to cut the thermal signature of airstrips, making them less visible to spy satellites. CoolSeal was found to have reduced road temperatures by five degrees Celsius. This July, the Mecca municipality in Saudi Arabia initiated a project with Japanese company Sumitomo to cool pedestrian roads. Mecca, too, is looking at a target of reducing temperatures by five degrees Celsius.

With the 2020 Olympics round the corner, Tokyo had launched a series of countermeasures to beat the heat. The latest effort has been to cut roads temperatures by as much as eight degrees Celsius. In addition, the Tokyo2020 marathon event has been scheduled to begin at 6am.

The cities that are trying to cool roads have an additional agenda of controlling the urban heat island (UHI) phenomenon, where cities are significantly hotter than surrounding rural areas because of reflective surfaces and other structures. Waste heat released by vehicles, generators and air conditioners also contribute to UHI.