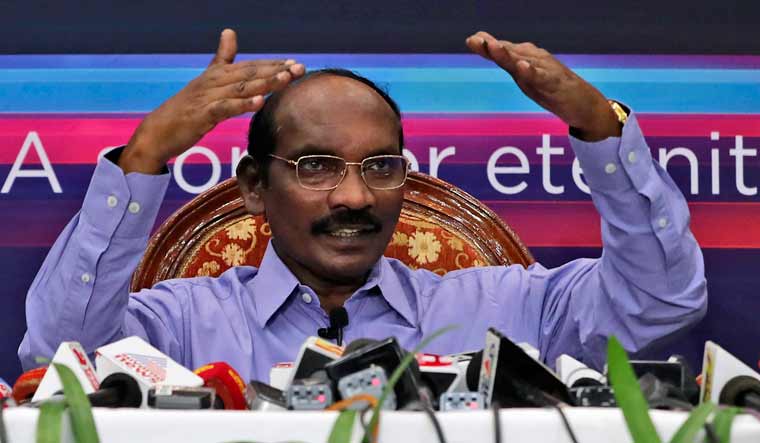 ISRO Chairman Dr K. Sivan has termed the successful completion of the Lunar Orbit Insertion (LOI) manoeuver of Chandrayaan 2 as a major milestone next only to the soft landing on the moon. The LOI was completed on August 20th 2019 and the duration of the manoeuver was 1738 seconds beginning from 0902 hrs IST. The orbit achieved is 114 km x 18072 km. Sivan said that the LOI was done perfectly. “If LOI was not proper we may not have been able to get back the Chandrayaan 2 spacecraft,” Sivan remarked.

Following this, a series of orbit manoeuvers will be performed on Chandrayaan-2 spacecraft to enable it to enter its final orbit passing over the lunar poles at a distance of about 100 km from the Moon’s surface. Another major landmark of the mission will be on September 2, 2019, when the lander will separate from the Orbiter and enter into a 100 km X 30 km orbit around the Moon. "Post September 2 the entire attention will shift towards the lander. It will be like the separation of the bride and groom from their parents' house. On September 3 a small manoeuver will be performed to check the health of the lander. On September 7, at 1.40 am the powered descent will begin and at 1.55 am the lander will land on the Moon's south polar region between the two craters Manzinus C and Simpelius N,” explained Sivan.

According to Sivan, earlier soft landing attempts on the moon have met with only 37 per cent success rates. “We have learnt from the failures of the earlier soft landing missions. We have carried out enough simulations at the subsystem level, sensor level etc and carried out all that was humanly possible to make the soft landing a success. Soft landing on the moon is a new mission for us and there would more anxiety for us as it will be a first of its kind for us. We have tried to make the lander more autonomous with less ground control but the rover will not be autonomous and will be dependent on the lander,” observed Sivan.

The ISRO chairman pointed out that the Chandrayaan 2 mission will provide vital inputs and data for future programmes on the moon notably the NASA programme of human habitat on the southern pole of the moon. “The entire globe is waiting for the data from our mission,” added Sivan.

Interestingly the Vikram Lander can communicate with the ISDN at Bylalu near Bengaluru as well as the Orbiter and the Pragyan rover. The lander has been designed to execute a soft landing on the lunar surface at a touchdown of 2 metres per second. On the other hand, the rover Pragyan can travel up to 500 metres (0.5 km) at a speed of 1 centimetre per second and leverages solar energy for its functioning. It can communicate with the lander.

The Vikram Lander also has many payloads such as an instrument for Lunar Seismic Activity to characterize the seismicity around the landing site, instrument to examine the moon's thermal conductivity and temperature gradient and a Langmuir probe instrument to conduct ionosphere studies on the lunar surface. The rover Pragyan also has payloads such as an Alpha Particle X-Ray Spectrometer that will determine the elemental composition near the landing site and a Laser Induced Spectroscope that will derive elemental abundance in the vicinity of the landing site.

Space experts such as Narayan Prasad, the co-founder and chief operations officer of Satsearch also feel that LOI a major milestone for ISRO scientists. “The success of the insertion of Chandrayaan 2 into the lunar orbit can be deemed as a second major milestone victory for ISRO. The first was the initial insertion into the earth orbit and its orbit raising to put Chandrayaan 2 into the trajectory towards the Moon. This also means that ISRO engineers can now start focusing on switching on some of the payloads on the orbiter of the spacecraft itself to start collecting some data and transmit it back to the Earth before they release the lander and the rover,” remarked Prasad.