India still to set its targets for land degradation neutrality 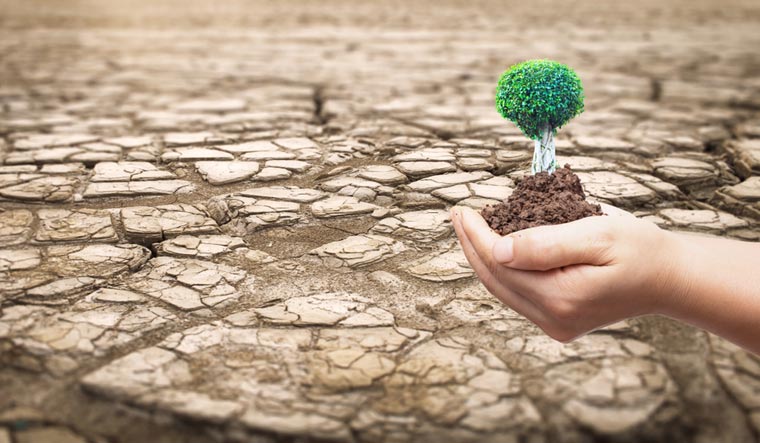 Even as India gets ready to host the Conference of Parties on the United Nations Convention to Combat Desertification (UNCCD), the country is still to set its targets for land degradation neutrality.

Speaking at a training event for the media in preparation of the COP, Anuradha Singh, a Director of the Ministry of Forests, Environment and Climate Change said, “India is committed to the goal of land degradation neutrality. The exercise of voluntary target setting is still on and should conclude over the next few months. Tackling desertification needs to be mainstreamed into existing programmes and schemes”.

The training was organised in association with The Energy and Resources Institute (TERI).

The convention, signed in 1994, aims to restore the productivity of vast expanses of degraded land, improve the livelihoods of more than 1.3 billion people, and reduce the impacts of drought on vulnerable populations by 2030.

The Conference of Parties (COP) is the Convention’s supreme decision-making body which comprises of the 197 ratifying governments and regional economic integration organizations. This will be the COP’s 14th meeting. By virtue of being the host nation, India will hold the presidentship of the COP for the next two years—till the next meeting. Not setting its own targets could call into question India’s moral commitment to lead the change. However, the hosting of the COP would impart fresh impetus to the efforts.

Land degradation neutrality (LDN) is a condition where further land degradation (loss of productivity caused by environmental or human factors) is prevented and already degraded land can be restored.

The State of India’s Environment report, 2017 calculates that nearly 30 per cent of India is degraded or facing desertification. This figure touches 40 to 70 percent in eight states—Rajasthan, Delhi, Goa, Maharashtra, Jharkhand, Nagaland, Tripura and Himachal Pradesh. Various estimates put the economic costs of degradation in the country at 2.54% of its GDP. Experts however believe that such estimates are ‘conservative’. Achieving LDN is the centre piece of the Sustainable Development Goal 15.3. The benefits of achieving this shall be reflected in climate resilience, energy, water and food security, increasing farmers’ income and poverty alleviation.

UNCCD Policy Officer Sasha Alexander believes that India has “tremendous potential” for setting and achieving ambitious LDN targets. Of the signatories to UNCCD, 84 countries, including China, the host for the last COP, have already set their targets.

“Many things, including political will impinge on the issue. We can expect some big announcements from the country over the next month”, he told The Week.