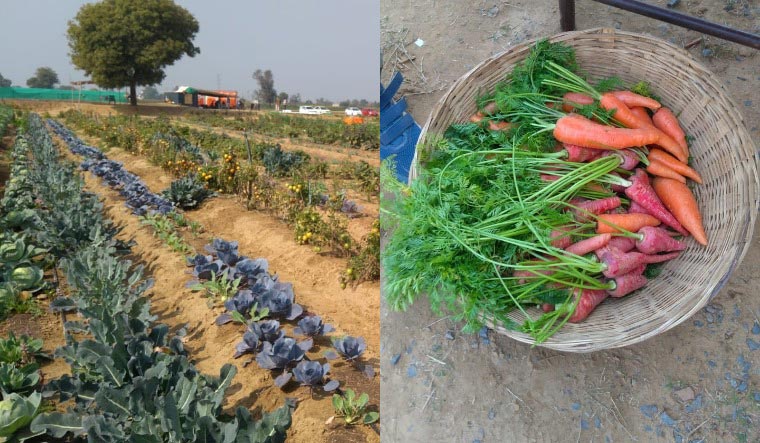 Farmers in many parts of the country are committing suicide. Those who are on the verge of suicide or living a life under 'agrarian distress' and 'rural indebtedness' say agriculture is no longer remunerative.

The demand for, as well as the government grant of, loan waivers and free income for farmers is on the rise. Into this depressing agricultural scenario, have stepped in young people who have given up lucrative jobs in the corporate and other sectors to become farmers. But with a difference. These new-age farmers come with loads of education, but nothing on agriculture. They work with apps and software, as they try to make farming lucrative for themselves.

And they come with ideas that go beyond only making money—sustainable farming, knowing where your food comes from and what is on your plate, pesticide- and chemical-free, if not certified, organic produce for the market are among some of their ideas. The market of these new-age farmers is not the mandis, and the apps are not one of the scores of sarkari apps aimed at enabling farmers to double their income in three or four or as many years as it takes them. 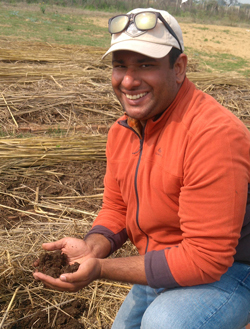 Showing THE WEEK around his 55 acres along Sohna Road in Gurugram district of Haryana on the outskirts of the national capital, Paras Chopra says his idea was really to give the people living in high-rise and gardenless residences of the Millennium City as well as South Delhi “a kitchen garden here, in a small farm that's a few kilometres away from their house, where they can't grow their own vegetables”.

A corporate lawyer who quit a firm to pursue farming—Paras says it's something he always wanted to do—Paras and his partner, Saurabh Agarwal, took the land on long-term lease from some landowners almost four years ago. While a few months went by getting all the legal work done, they spent three years just green manuring, fencing and levelling the land. It was in October last that they launched their app-based community farming project, Kosara, to their limited public, by word of mouth. 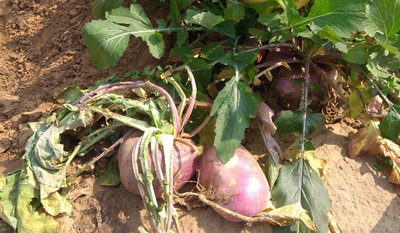 Those who prefer the “DIY” model can visit their patches whenever they feel like it, work on it with inputs and help from Kosara and take home the vegetables from that piece of land. While the subscription costs Rs 3,000 a month per unit, those who work on the land, harvest and carry home their veggies get double the size of land.

Water is not a problem, but electricity is; so, Paras has installed solar-powered water pumps. These, and the raised beds on which the seedlings are planted, are aimed at ring-fencing against the vagaries of the weather. There is a large patch for vermi-composting. Also because it is all about being people's personal kitchen garden and a community farm, Kosara will not sell vegetables—not in the farm, nor anywhere else.

Right now, the neat rows of raised beds are full of giant-sized radishes and turnips, green and deep-red lettuce leaves, cherry tomatoes, broccoli, brinjals, and capsicums among others. In a netlon-covered greenhouse of sorts, Kosara raises the seedlings. Lines of black drip irrigation pipes connect every plant, and are, in turn, connected to underground pipes that carry water to a few numbered units of the farm.

The three-year gestation period apart, the main challenge that the lawyer-turned-farmer lists is the job of educating people on this idea of a kitchen garden away from home. They also have wheat and bajra growing, because they have lots of land that needs to be utilised. In the near future, Kosara hopes to grow fruits and have poultry to provide free range eggs that subscribers want in their basket.

Unlike traditional farmers, Kosara is open to angel investors. Paras elaborates, “That is because we want to grow. We have similar plans for other metros, where people don't have kitchen gardens to grow vegetables that are safe and healthy for them. Now, we are able to cover only a small part of Delhi and Gurugram. We hope to have a farm near Noida for residents of East Delhi and other parts of the National Capital Region... the possibility is endless.”

Kosara has 75 subscribers, so far, mainly young families, and a few singles who have got together to share the vegetables. There are a few retired senior citizens too. “I know for a fact that it's going to pay off. There is lots of scope in agriculture, and my father, Ajay Chopra, has been involved in agriculture for over 30 years,” says Paras, who is hands on, while Saurabh continues with his legal practice.

Their goal is to enroll about 200 subscribers this quarter. Kosara has employed 18 people, mainly from the local landless, and half of them are women in the 30-55 years age group. They work from 8am to 5pm, take home Rs 8,000 a month, are paid bonuses and get four days off a month. Two of them supervise the farming operations, and one of them is a tractor driver.

On Republic Day this year, many subscribers visited the farm, to partake of food made from some freshly harvested vegetables and greens. The women working at the farm turned out rustic rotis made of just milled corn. Children played around in the mud and slush and on the lawns, as adults took in fresh air, enjoying their kitchen garden and the farm life. Last Sunday, a few friends were invited for a delicious farm-to-table meal, turned out by young chef Hiten Puri and his friends, right in front of them.

“We visited a restaurant with the idea of telling them about the concept behind Kosara. Hiten, who was working there, suggested that he cook at the farm once in a while, and so he was on board. Some other youngsters who heard of it, joined in, and our team is thus growing,” says Paras. Doing this kind of a lunch for anyone who wants to drop in is an appealing idea, but Paras says they have to prepare to do that flawlessly.

In Bengaluru, Shameek Chakravarty, a founder and CEO of 'Farmizen', decided to turn a farm entrepreneur if not a new-age farmer. With a B.Tech from BITS Pilani and a management degree from ISB, Shameek was director of project management at Yahoo in the US, when land and organic vegetables beckoned.

The Farmizen model is a lot like Kosara in terms of subscription—of kitchen gardens away from homes without open space and balconies that are very compact—and choice of a unit of land(depending on the farm size), vegetables to be grown on it and the home delivery of vegetables. But this is where the similarity ends.

Farmizen uses an app to facilitate its subscribers, but is an 'aggregator' where farmers are concerned. The farmers who partner with Farmizen are responsible for all the work on the ground, but grow what the subscribers want. “People who subscribe are virtual farmers, and the ones who own the land are the real ones,” says Shameek, who leads a team of people who manage the logistics, marketing and customer relations.

Farmizen shares the revenue with farmers who benefit from the fixed amount they receive every month.

About two dozen farmers around Bengaluru, three around Hyderabad and even one around Surat partner with Farmizen to grow organic vegetables of the choice of subscribers who pay Rs 2,500 per month for a 600sqft kitchen garden that is “virtually” theirs. It appears to be a win-win situation for farmers as well as people who want fresh and safe, chemical-free vegetables that are local and seasonal.

Venkat Iyer quit his job in IBM to turn a farmer. Unlike the app-generation Paras and Shameek, Venkat started out on his farm in the Palghar district of Maharashtra, growing commercial crops in an organic way, dealing with issues of logistics and marketing them. Almost 16 years into agriculture, Iyer continues to be a farmer. In a gripping book, Moong Over Microchips: Adventures of a Techie-Turned-Farmer, he says farming is not a losing proposition.

Education apparently is making all the difference to how remunerative farming is. These new-age farmers, who are not born into farming households, are saying boo to the conventional ideas around cultivation and the glib sales pitch of MNCs in the business of chemical pesticides and fertilisers. They seem to be confident that agriculture need not be a losing proposition.

Everyone talks about those with small holdings and the landless labourers working on leased farms falling into the trap of money lenders. But there has been very little discussion even among academia and pro-farmer activists on the need to ensure formal and good-quality higher education—going beyond the technical agricultural sciences—to children from agricultural families in rural India.

They need not be masters in corporate law or business management, but surely graduates with an education that will open their minds and make them reinvent the way they will farm.