India's first solar-powered, driverless bus has made its maiden journey 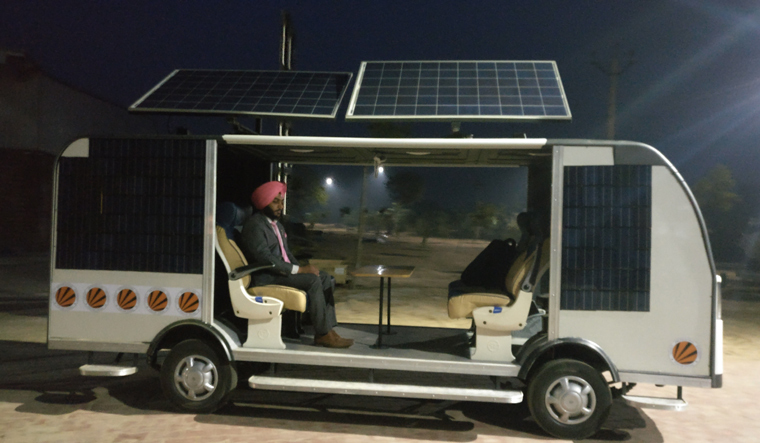 India's first solar-powered, driverless bus made its maiden journey at the Indian Science Congress on Thursday.

The bus, designed and built by a team of students of Lovely Professional University (LPU) at Jalandhar, uses GPS and Bluetooth for navigation. ''The camera installed on top of the bus allows for image processing. It senses the road pattern and the bus moves accordingly,'' said Mandeep Singh, project head, Solar Driverless Bus at LPU.

Even when Google's self-driving cars were in the news for the wrong reasons, the LPU team took their project forward with great gusto. ''We have been working on this project for the last five years. Around 300 students, from departments of electronics, electrical and civil and mechanical engineering, have been part of it. It was a huge project and bringing everyone together itself was a huge challenge,'' said Singh.

The bus rides smoothly. However, there is something about it that reminds you of a buggy. ''Like a buggy, it is meant for airports and estate roads where the traffic is limited,'' said Pratham Mittal, head, new initiatives at LPU. ''The bus comes with sensors in the front, back and sides. In case there is an obstacle on the way, it will stop automatically. It will start beeping from a distance of 10 metres,'' he explained.

The bus, which costs Rs 6 lakh, has a neatly designed cabin for the driver. Wherever network is not available, it can be driven using the manual transmission option like an oridinary bus.

The project has been a great learning experience for the LPU team. ''We are not doing this for money, We are doing it so our students can learn. We want them to benefit out of it,'' said Mittal. ''Right now, we are not planning for commercialisation. We cannot ride it on the roads now. We have to get a bunch of licenses from the highway authorities, road authorities and vehicle authorities. We may apply for these licenses later. But that will take some time,'' he said.

It is a win-win situation for the industry as well as the students. ''Engineering students should not confine themselves to bookish knowledge. They should get their hands dirty. Projects like this, where the students get opportunities to build something that can be commercialised and patented, add value to their portfolio and make it easier for them to find jobs in the future,'' he said.

The LPU team made headlines in 2014 when they presented 25 innovative vehicles at the Delhi Auto Expo which included self-parking, smart hybrid and cryogenic engine cars. The young innovators have plans to come up with more evolved driverless vehicles that can be used on city roads in future.