Has India lost 26 of 65 patrolling points to China in Ladakh? 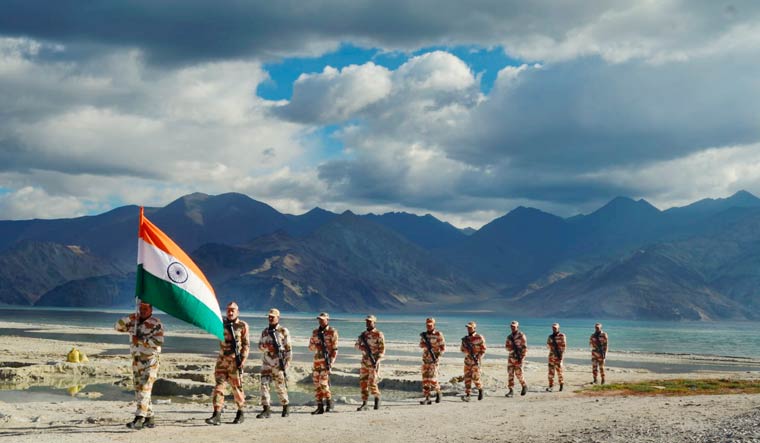 It’s being called ‘’Salami slicing’’- the tactic of the People’s Liberation Army of China which has been trying to grab land inch by inch. This is worrying border states like Ladakh, Sikkim and Arunachal. They have informed the Union government of the steady rise in Chinese aggression bolstered by the rapid rise in military infrastructure.

Ahead of the annual DGP conference in Delhi chaired by Prime Minister Narendra Modi and Home Minister Amit Shah last week, an annual exercise was conducted asking superintendents of police and other officers of all states and Union territories to share their reports on existing security challenges.

The idea is to get a feedback from the lower ranking officers on the ground and not just the top cops who make their presentations. These reports are not submitted at the DGP conference, neither discussed there; rather they are analysed and discussed internally by the Union home ministry and central agencies as they prepare the roadmap going forward taking into account the inputs received from all over the country.

One such police report from Ladakh has raised heckles by saying that there has been a loss of 26 of 65 patrolling points on the Line of Actual Control due to the salami slicing strategy of the PLA. Of 65 patrol points, the presence is lost in 26 (PP 5-17; 24-32; 37, 51, 52, 62) due to restrictive or no patrolling by the Indian security forces, says the report from Ladakh. “Later on, China, forces us to accept the fact that as such areas have not seen the presence of Indian security forces or civilians since long, the Chinese were present in these areas. This leads to a shift in the border under control of Indian security forces on the Indian side and a 'buffer zone' is created in all such pockets, which ultimately leads to loss of control over these areas by India.”

While the report is alarming, these claims have time and again been rebutted by the Army, saying it is adopting an approach of “dominance” and not limiting itself to defending the LAC till the patrolling points on the “map”, which are well within the Indian claim.

The central idea is to dominate and defend and not limit discussions to maps and patrolling points defined much earlier, said an official. Which is why these reports need to be analysed in a full spectrum. As the discussions between various stakeholders like local police, Army and other border guarding forces are bound to address these concerns going forward, the common lesson, however, is that any short term goal in the area - to keep peace - can result in worrisome outcomes.

The challenges are many on the LAC; the predominant one being the patrolling by Indian security forces where there is lack of motivation and morale to patrol barren acres of land with no population, and where no economic activity is being carried out. Not to forget the terrain and climate conditions, which do not make it easy to keep up the general idea of area domination on ground as much as it requires.

A senior official said these concerns are coming to the fore today because of the changed strategy and aggressive push by the Union government, asking the defence forces not to allow the PLA to take advantage. “The fact that we are focusing on the LAC and not allowing the Chinese free play in these areas, is bothering them. We have always had a presence; we are only undertaking patrolling more vigorously and not limiting ourselves like before,” said an officer. The approach of successive governments has been different - the focus was more on Line of Control with Pakistan than the LAC which was coupled with the poor access to disputed territories with China. As New Delhi focuses on border infrastructure and aggressive patrolling on LAC, China is also playing tough.

The local police has told the Centre that the PLA has taken advantage of these ‘’buffer areas’’ in the de-escalation talks, by placing their best of cameras on the highest peaks and monitoring the movement of our forces.

“This peculiar situation can be seen at Black top, Helmet top mountains in Chushul, Demchok, Kakjung, Gogra Hills in Hot springs and at Depsang plains near Chip Chap river,’’ says the note.

It also explains the salami slicing strategy. “They object to our movement in the buffer zone, claiming it to be their area of operation and then further ask us to move back to create more buffer areas.” This situation happened with Y-Nallah at Galwan where the Indian security forces were forced to move back to camp one without dominating the higher posts overseeing the Y-Nallah. Chushul the border personnel meeting point near the airfield has become the de-facto LAC and Nilung Nallah at Demchok has been restricted, said the report.

The “play safe’’ strategy does not work, it was pointed out, which was resulting in restricting movement of civilians and grazers, decreasing pasture land and other consequences, in a bid not to annoy the Chinese in disputed regions. The report quoted the example of an officer who had once said “if by retreating 400 meters back we can buy peace with PLA for four years, then it’s worth it.’’

The lessons have already been learnt. It has never been worth it, as seen during the standoffs in Galwan in 2020, Doklam in 2017, and Demchok in 2014.

While there may be criticism about the police report being a one-sided assessment not taking into account the perspective of the first line of defence, ground assessments like these being shared by the local police should help in an overall government approach, even if the flow of information from bottom to top may be uncomfortable initially.